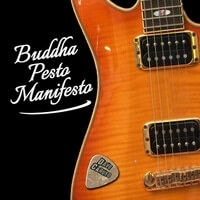 “Listen to this song coming at you / As you hang on every word,” sings Dave Caruso on “Listen to This,” the opening track to his solo album Buddha Pesto Manifesto. The request is not so much a challenge as it is an invitation, but the melody is so enticing that you hang on every chord and harmony.

“Listen to This” times in at only 1:08, so it’s only an appetizer for what’s to come – similar to Brendan Benson’s “Tea” on One Mississippi, which, incidentally, is also 1:08. Buddha Pesto Manifesto (BPM for short – also an abbreviation for beats per minute) is a treasure trove of memorable hooks and melodies, crafted by Caruso with care and a love of pure pop music.

Caruso has so many musical and lyrical ideas on this record and manages to stuff them into each song. “Boomer, Jenna & Lennie” has an Andrew Gold feel throughout the song, but features a memorable descending bass line in the chorus – a brave but perfect counterpoint to the verses. On the third chorus, you hear nods to Gold’s “Lonely Boy” – one of the best pop songs of the 1970s.

Images of the Beatles

“Hanging With You” is the Beatles reincarnated; Caruso even throws in a Beatlesque “Oooh!” from “From Me to You” to punctuate the similarity. And that’s okay; Caruso can carry his own melodies without borrowing from others, and the insertion is an obvious nod to his contemporaries.

“God’s Green Acre” features synthesizers that mimic a harpsichord and violins – again, a nod to the Fab Four. “Go Ahead (Don’t Listen)” made me nervous with its ska-like introduction, but it alternates between that and a straight 4/4 rock beat. Sandwiched in the middle of the album, it injects a great deal of energy into the album in just under 2 minutes. And strangely, the ska didn’t bother me.

He continues the energy in “Allendale,” then evokes a bit of the 80s with “Getting Involved.” “And here, deep within our minds / Is strength we never thought we’d find,” he admits. Caruso could be singing about himself, for he has reached deep within himself to create memorable songs throughout the album.

And that’s probably the only problem; each song has its own earworm – some with several – and during the day, they all manage to make their way into your head. Okay, that’s not a problem, unless you have dozens of songs going through your head at once like I do. But it’s the hallmark of a good pop song, and Caruso has managed to do it not once but 10 times.

Caruso is clever with his lyrics, which usually have a double entendre. “Punctuating Shatner” is built on a meme making fun of Shatner’s pauses when he speaks, but he turns it into a description of two people who love to talk, but because they’re so caught up in semantics, “their own conversation becomes verbal quicksand,” he said in an interview. The song is also littered with Squeeze references – something you have to look for, but they’re there.

Caruso ends the album with a piano ballad, “I Get to Make You Laugh.” It’s touching and doesn’t resemble the Beatles at all. If anything, it’s Elton John from the early 1970s – a perfect ending to a perfect album. Buddha Pesto Manifesto is one of the top listens of 2017 so far – there’s not a bad apple in the bunch, which makes it very appetizing – and good for you.