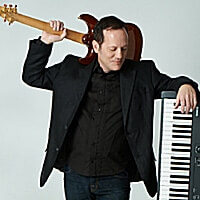 A few weeks ago, I wrote about the new year and the new musical gems that lay waiting to be heard – whether it’s from some old LP from 1973 or a new song from an obscure indie artist that immediately grabs my attention.

We’re just over halfway through January, and I’ve found the first jewel: Dave Caruso’s “Champion,” the second cut off his highly tuneful and first full-length album “Cardboard Vegas Roundabout,” is like eating frosting straight from the jar. Splattered throughout the song are Beach-Boys harmonies – even the “ba, ba ba ba ba” syllabic lyrics that the Beach Boys were known for. He even throws in a high-pitched “wooo” in a way that would make Brian Wilson swoon.

Especially apparent is a deep bass vocal that adds extra weight and dimension to the harmonies – something you don’t hear too often, but it’s a joy to hear. It’s as if a barbershop quartet has walked into the studio.

Caruso (no, not the guy on CSI: Miami) has a knack for melody and harmony. The verses to “Champion” are piano based, with a sweet, downward bass line. The Beach Boys join again on the second phrases, and yes, hand claps join.

At times the harmonies swirl around in different phrases – it’s as if you opened two other jars of different frosting and put them all on the same spoon. “Champion” is pure pop, and if you can handle the increase in blood sugar, it’s so satisfying that you can’t help but listen to the whole album.

There’s one. I’m waiting breathlessly for the next gem.