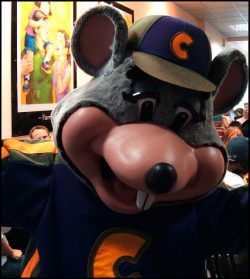 A few days ago, I entered the hell that is Chuck E. Cheese’s.

If you’ve been lucky enough never to have experienced Chuck E. Cheese’s, let me describe it: Picture 100 screaming kids, high on birthday cake, bad pizza and soft drinks, running amok and playing games and rides that I played on outside department stores 30 years ago – one-horse merry-go-rounds that do nothing but spin, Whack-a-Mole games, and the ubiquitous plastic tube/spiral slide contraption that you see on every playground. Add at least one parent for each child, running after them with a dazed look in their eyes, and you have a good idea of what I’m talking about.

The mascot for Chuck E. Cheese’s, Mr. Cheese himself, is a giant gray rat. A quick Google search reveals that the E in Chuck E. Cheese stands for “entertainment.” I thought it stood for “Eeek!” or “exterminate.”

My youngest daughter was there for a birthday party. She continually cast a wary eye to the 6-foot animatronic version of Chuck, who stood behind a shower curtain most of the time (I’m sure the kids thought he was ready to pounce on them like Norman Bates) but emerged every five minutes for some “entertainment.” It’s here where I finally tie this horror story to music.

I thought that the rat would sing some upbeat songs designed for kids – “Walking on Sunshine,” “Celebration” or at the worst, something like “Who Let the Dogs Out?” (which as I write this, seems especially relevant given the vermin singing it).

Actually, I liked the songs. They were all 80s hits. I’m just wondering who decided that kids would like them:

Get up and dance kids! Cuz tonight you’ll be afraid to close your eyes!

I know I’m reading too much into this. The kids were too busy playing and exchanging germs and mucus to listen to a singing rodent. But I thought it amusing.