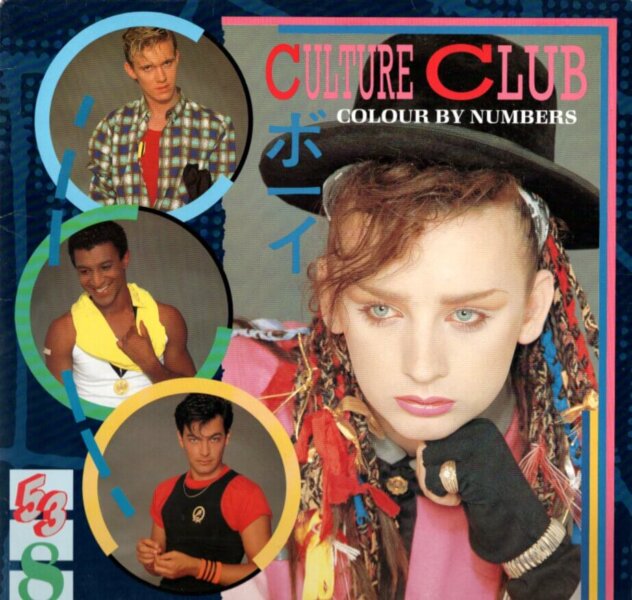 Culture Club was not a one-hit wonder by any means, but they epitomized the 80s’ here today, gone tomorrow mentality when it came to their stars. Coming across the pond in the fall of 1982 with their No. 2 hit “Do You Really Want to Hurt Me,” Culture Club seemed to be Duran Duran’s biggest rival, and Boy George graced the cover of every teen magazine and gossip tabloid. In two years, they racked up five Top 10 hits.

And in less than four years, the group had broken up, their last two albums failing to produce any major hits.

1983’s Colour By Numbers represents the group at the peak of their popularity, which is surprising since it debuted so quickly after their first release, Kissing To Be Clever. At the time, record companies demanded that artists go back in the studio after a hit record to recreate the sound that made them successful, and most of the time, they either had nothing left in the creative tank or didn’t have enough time to develop something as good. Just look at Men at Work (Cargo) or The Knack (. . . But The Little Girls Understand).

Judging from the first cut, the smash hit “Karma Chameleon,” Culture Club shows that they had at least a little more left in the tank. The simple melody and catchy lyrics are pure bubblegum, but there’s nothing wrong with bubblegum.

But then the wheels begin to fall off. “It’s a Miracle” is a rewrite of “I’ll Tumble 4 Ya,” only less innovative. The chorus consists of the title sung over and over before George proclaims, “Dreams are made of emotion.” Lyrics were never his strong suit. However, George’s voice is stronger and more experienced and controlled on this album. He grew a lot musically in a year.

If only the songs were as strong. “Miss Me Blind” is a retread of “Time (Clock of the Heart),” albeit a little more aggressive (guitars!). But the rest of the album is tame and unadventurous. Gone is the soulful calypso-tinged pop of Kissing To Be Clever, replaced by such milquetoast numbers as “Changing Every Day” and “Stormkeeper.” Granted, the soul of the group’s first album was tame as well — hardly edgy — but it was different than the synth-pop we were getting from most groups in the U.K. Had we ever heard anything like “Do You Really Want to Hurt Me” before? By comparison, the songs on Colour by Numbers aren’t unique at all.

Perhaps in an effort to inject some much-needed soul into the album, the group made more use of Helen Terry — who sang backup vocals on Kissing To Be Clever — to the extreme. Her shrill voice is out front in the mix and lands with the grace of a 50-pound sledgehammer, sometimes dominating entire songs in just a few measures. At times, George tries to soften up the mood and does a good job with the heartfelt “That’s the Way – I’m Only Trying to Help You” until Terry bursts in and like a photobomb, ruins the song. It’s like creeping up behind someone and scaring the bejesus out of them.

If you like your pop middle-of-the-road, then Colour By Numbers is for you. Otherwise, go listen to “Do You Really Want to Hurt Me.”