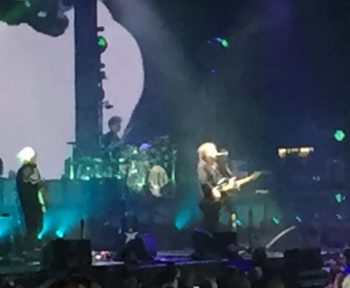 My attempt at a concert photo from Row SS

“It’s so fucking hot,” said Robert Smith, lead singer of the legendary post-punk band the Cure, in between songs.

And it was. The temperature was hovering near 90, and with the lights on stage it must have felt like 110 degrees. Nevertheless, the 57-year-old, still sporting makeup and spiked hair, led his band through three hours of hits and album cuts, sounding as fresh and sharp as ever.

The first three songs were from their breakthrough, morose album Disintegration, and I was wondering if they were going to play the album from beginning to end. But then they began to mix it up a bit, playing some more obscure album tracks and tracks from their more recent albums. I got lost a few times, having to look up lyrics to see what song the band was playing.

A much happier Cure

Gone was the shoe-gazing, depressing sound of the Cure on their albums; perhaps it’s hard to duplicate that with all of the layered keyboards which add to the depressing sound.  Most of the time, they sounded like a tight, well-rehearsed rock band. Other times, they were a pop band. Even bittersweet songs like “Pictures of You” sounded a little poppy.

The only time they really sounded like the Goth band that they were was during “Prayers for Rain,” one of the more melancholy songs from Disintegration. I was a bit surprised that they played nothing from Pornography or Bloodflowers, the other two albums that with Disintegration present a trilogy of depression.

The band still played almost every song from Disintegration, and they played all the crowd favorites, including “In Between Days,” “Just Like Heaven,” and “Friday I’m In Love.” And Robert Smith was funny, cracking jokes in between songs, but he didn’t really talk all that much. They launched into song after song.

After three encores, I was sure that the lights would come on. So I missed “Why Can’t I Be You,” “Close to Me” and “Boys Don’t Cry.” I could kick myself for leaving early, but I had never heard of a fourth encore. Apparently, after almost 40 years, the Cure still love to play, and they don’t know when to quit.