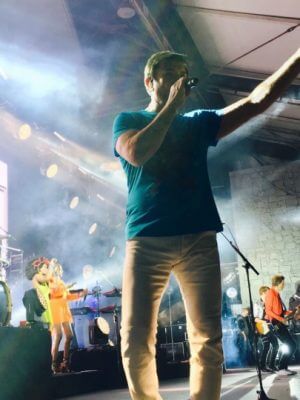 I was 14 when Duran Duran first hit it big in the United States with “Hungry Like the Wolf.” It became an MTV staple, and girls treated the band as if they were the second coming of the Beatles.

That made a teenage boy uncomfortable. Despite the critics’ tossing aside of the band, citing their New Romanticism and concern for fashion and music videos, I liked them. Their songs were filled with hooks – something that would instantly recognize it as a Duran Duran song, and I did see some parallels with the Beatles. They wrote their own songs, and they were so inventive, like nothing you had heard on the radio before. They had a gift for that, and it was paying dividends for them, no matter how low Simon Le Bon unbuttoned his shirt.

Despite their marketing to teenage girls, their lyrics weren’t full of love and romance; in fact, they were downright obtuse and ridiculous (“Don’t say you’re easy on me / You’re about as easy as a nuclear war” and “The reflex is a lonely child / Who’s waiting by the park”), which contributed to critics’ shellacking of them.

The critics were wrong. The band has survived now for over 35 years in one semblance or another. The latest incarnation, only missing one original member, made it to Chastain Park Amphitheatre Saturday night, where the middle-aged women outnumbered men two to one.

Again, I didn’t care. The band, on the last performance of this leg of their North American tour, gave a rousing performance that showed they haven’t lost anything; in fact, they sounded better than ever.

Granted, they had some help; original members Le Bon, John and Roger Taylor (no relation), and Nick Rhodes were joined on stage by a saxophone player/keyboardist, semi-permanent band member Dominic Brown, and two backup singers to fill the sound out.

From New Wave to Funk

But really, all they needed was Roger and John Taylor. In what people generally toss aside as a synth-driven New Wave group, Duran Duran had become a funky group – or maybe they already were. Roger Taylor’s syncopated drumming propelled every song, and John Taylor’s intricate bass lines provided ideal countermelodies to Le Bon’s perfect singing.

I was also unaware that “Notorious,” the band’s funkiest hit single, had crept into my Top 5 all-time Duran Duran songs. The band played it with plenty of energy and pizzazz, the backup singers lending a hand to the infectious chorus.

Of course, they played some songs from their new album, Paper Gods, and I must admit I was not as familiar with those as I was with their canon of hits. I was able to sing along to “Pressure Off” and hum to their cover of Grandmaster Melle Mel’s “White Lines (Don’t Don’t Do It), even if I didn’t remember all the words. 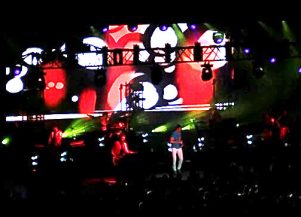 …and a view from the cheap seats.

But the crowd was there to hear the hits, and for the most part, the band delivered – “Wild Boys,” “Hungry Like the Wolf,” “Is There Something I Should Know,” “A View to a Kill,” “Ordinary World,” “Girls on Film,” “Come Undone,” “I Don’t Want Your Love” and “Save a Prayer.” They even reached back in their catalogue and pulled out “Careless Memories,” one of their first singles in the UK that curiously flopped, and didn’t chart here. I’m sure only true fans knew what was going on.

There were several mini-medleys. “Planet Earth” morphed into a Bowie tribute with “Space Oddity,” and “(Reach Up for the) Sunrise” segued into a too-short rendition of “New Moon on Monday” (one of my favorites).

Surprisingly, the big hit for the crowd was the finale, “Rio,” which only peaked at #14 on Billboard’s Hot 100. The crowd was singing at the top of their lungs as the band went out on a high note, so to speak.

My ears rang as I left Chastain Park, always a sign that you’ve seen a powerful show. The fact that it was damn good, too, was a bonus.