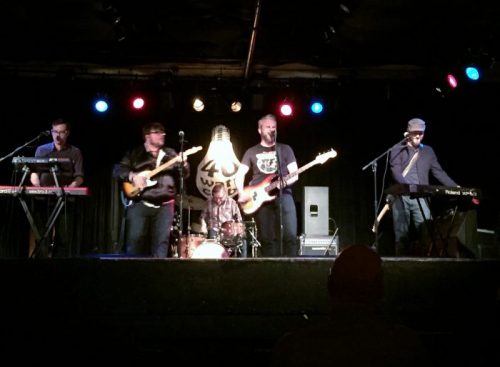 It was a somber mood at the 40 Watt Thursday evening as the Explorers Club took the stage at about 11:20 p.m. Guitarist/keyboardist Mike Williamson addressed the mood without needing to explain why. Williamson, a child of the 80s, was privately mourning the death of Prince as all of us were, recognizing the artist’s talent as a musician and instrumentalist. But in his own calm, friendly demeanor, he promised to play uplifting songs for everyone to enjoy.

And that’s what the Explorers Club do best. With their multi-part harmonies, obvious Beach Boys influence, and well-crafted pop songs, they had the small crowd enjoying pop music at its best. Many of us who lived in Atlanta climbed into our cars and drove the 40-50 miles to Athens, knowing full well that we had work the next day, just to come out and see them.

Leaning heavily on their first album, Freedom Wind, the group, which has now dwindled to five from their earlier days when they amassed close to 10 people on the tiny stages of the bars, compromised on vocals, relying on four-part harmonies that lead singer Jason Brewer and Williamson crafted for the live sound. No difference – the vocals were still spot on and ethereal. “This is the first time we can cover all the territory with just five people. It used to take six to do the vocal and keyboard and guitar parts. It makes things streamlined; it just makes things easier,” Brewer said. “Sometimes when there’s too many moving parts it doesn’t always work out.”

They’re preparing songs for their new album, Together, but Brewer admits it’s hard to recreate the five-part harmonies present on their record with only four people singing live. “That’s kind of interesting. The song ‘Quietly’ that we did from the record, we jumped around a lot singing part of one little part and jumping up to another couple of other notes that are in someone else’s part.” The new songs are also more subdued and don’t fit in well with the rest of the set, so they settled on four from the new record.

No matter. The Explorers Club can keep playing “Forever,” “Lost My Head” and “Last Kiss” for every set they play. They even played a Beach Boys song, addressing, as one fan said, the “elephant in the room.” But the new songs show a bolder, more experimental Explorers Club that realizes a vision that Brewer had several years ago. It’s still Beach Boys, but more “Wild Honey”-era Beach Boys, but with its own sound and meaning. It’s something the Explorers Club has always been able to do – emulate the Beach Boys without sounding like a cover band. The album is completed now, set for a June release, with a single due May 13.

This tour is short – only four stops – to be supplemented by a slightly longer trek when the album is released. Here’s hoping the new album – in its fully realized version – will attract attention and give this band the attention it so richly deserves.