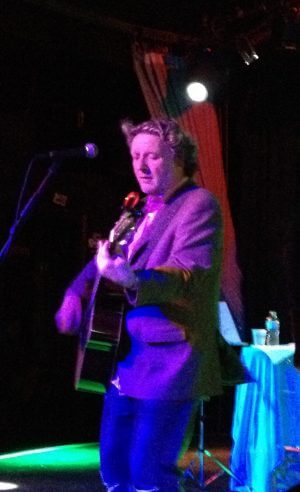 During the early 1980s, amid such megastars as Michael Jackson, Duran Duran, Def Leppard and Men at Work, there was Squeeze. The group, fronted by Glenn Tilbrook and Chris Difford, drew comparisons to Lennon and McCartney for their Beatlesque music. The group’s fans were smarter than your average music fan, one notch up from Elvis Costello fans.  They marveled at lyrical references to Harold Robbins novels and William Tell.  They had their black coffee in bed. They were different.

So was the crowd at Glenn Tilbrook’s latest stop in Atlanta Thursday; about 80 of the 100 people gathered at Smith’s Olde Bar were older than 40; half were over 50 and/or approaching 60. But they knew every word of every song, singing along with Tilbrook and bouncing around like it was 1980.

I am in my 40s, but I lived a sheltered life in north Georgia, far away from obscure British bands who couldn’t quite latch on in America. It wasn’t until 1988 when I discovered this band, and I immediately caught on to their clever lyrics. But the music – the instantly memorable melodies that got into your head and bonded with those lyrics to create stories, little vignettes that were almost literary in and of themselves – that is what caught my ear.

Tilbrook was the man behind most of those melodies, the most popular one being 1981’s “Tempted.” Indeed, when I told everyone I was going to see Glenn Tilbrook of Squeeze, I got blank stares. Then I sang “Tempted,” and they all nodded, “Oh yeah, I love that song!”

Tilbrook didn’t perform “Tempted” that night – perhaps it’s grown wearisome over the years – but he played almost every other song from the group’s greatest hits compilation, Singles: 45s and Under, the album in which I first became familiar with them. He hadn’t changed much over the years, even though, like his fans, he’s approaching 60. His hair draping past his ears and flying in wisps from the two circular fans on stage, he dazzled the crowd not so much with his clear, angelic voice – the guy could sing from a phone book and make it sound good – but his guitar wizardry. Starting with an acoustic guitar, he flew through instrumental phrases with ease, his fingers hustling across the fretboard.

Later Tilbrook switched to an electric guitar, but he was still the only performer on stage. He stayed relatively quiet between songs, opting to focus on the music this night. He played some songs from his quirky but tuneful new album, Happy Ending, but the crowd responded mostly to the music of their youth. He encored with even more hits, “Hourglass,” “Goodbye Girl,” and “Another Nail in My Heart.”

During “Black Coffee in Bed,” the audience spontaneously broke into background vocals while Tilbrook sang the lead vocals. And at that moment, as I looked around, I no longer saw old people awkwardly trying to relive their younger days. I saw older people still enthusiastic about music – so much that they danced around, singing each lyric with smiles on their faces. They were still young, and they could still dance around recklessly while still spouting the innovative rhymes and symbolic lyrics, sometimes delivered at top speed.

I, too, smiled silently, knowing we were the precious few, the proud Squeeze fans who got it. And we would never let go.