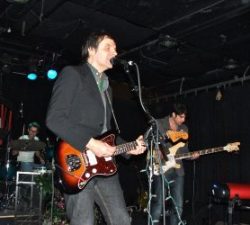 Mike Viola said hello to Atlanta and got a smattering of applause from those present at Vinyl in Midtown Saturday night. Most were there to see Rachael Yamagata, the headlining act, so this was a chance for Viola to introduce himself to some new fans. He launched into “Soundtrack of my Summer,” the standout track from his new album, Electro de Perfecto.

Thirty seconds into the song, one of his pedals malfunctioned.

Viola wasn’t fazed one bit. He stopped the rest of his band, stared at the crowd, and asked, “Didn’t this happen in a movie once?”

A ripple of laughter ran through the crowd. He paused for effect.

“We’re gonna take it from the top, because that was fucked up.”

The crowd whooped its delight at the icebreaker, and so Mike Viola started again, sounding better than ever.

Viola is a consummate professional, having played in front of crowds for literally decades. He’s handled mishaps and miscues, faulty wiring, and yes, broken guitar pedals. And by the end of his 45-minute set, he had several people wondering who this guy was and why they’d never heard of him.

Judging from online reports, he is turning some heads. happilymaudlin, a Yamagata fan, commented from her Tumblr blog about an earlier show: “I also very much enjoyed [Yamagata’s] opening act, Mike Viola. His music was sweet and catchy. I also got excited over the fact that he used “maudlin” in a sentence.” Hear, hear.

Viola is a master at creating a perfect pop song. He’s best known as the voice behind the pop gem “That Thing You Do!” a song he didn’t actually write, but many of his songs sound as if they were cut from the same album. And he played the catchiest songs from his catalog. He introduced the feel-good bubblegum gem “The Strawberry Blonde” as an ode to his wife. “Most people write songs about the inner machinations of the human condition,” he explained. “I said, ‘Nah, she needs a pop song.'”

“The Strawberry Blonde” introduced a small suite of autobiographical songs about his marriage and family: “What to Do with Michael,” a jaunty piano-based number that explained how he met his wife; “Let’s Have a Baby” (self-explanatory); and “Girly Worm,” his nickname for his daughter, which featured an intro similar to “The Addams Family” theme.

Viola played with just two other people, bassist Nolan Verner and drummer Ricky Free, both from Nashville. The two had been recruited to tour with Viola through the South and been playing with him for all of two days; in fact, the first notes the played together were in front of a crowd in Nashville – no rehearsal, no sound check. But they sounded as if they had been playing together for years, playing oldies as well as current material without a hitch. Viola alternated between guitar and keyboards throughout the set.

As if that weren’t enough, Viola, well into his 35th stop on this tour, played another hour as part of Rachael Yamagata’s band, helping with the banter between songs due to Yamagata’s laryngitis.  He’ll be doing this for nine more shows; let’s hope he’ll come south again.