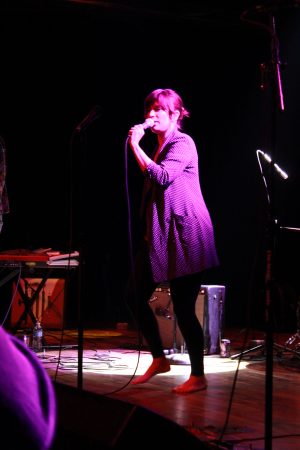 Nicole Atkins came to Atlanta Sunday night, bringing her Gothic torch songs to about 40 people at Terminal West. Again, I say, where are you, Atlanta? Yet another class act comes into town and you’re off at Wild Bill’s or seeing Sheryl Crow for the seventh time, leaving Atkins to play for a small but dedicated crowd.

Atkins was on the last legs of a tour in support of her latest LP, Slow Phaser, which is a return to the melodic if not spooky sounds evident in her fantastic debut album, Neptune City. Performing barefoot, Atkins danced dreamily around the stage to the five-man band as she held one and sometimes two microphones to get the right amount of reverb in her soaring, road-weary vocals.

Atkins is a dreamer, and her songs reflect those dreams in a way that is melodic but still intense and sometimes dark. “I’m always naked in my mind / Coward in the shine of imaginary eyes / Waiting to be found out / Or just waiting to be found,” she sang in “Cool People,” a song from Neptune City. In “Who Killed the Moonlight,” she painted an even darker picture: “We are by the riverside / In the water the moon is dying / Who killed the moonlight?” she sings in a minor key. The verses paint a morbid picture before changing keys and breaking into a joyous, disco-tinged chorus where she affirms, “I’m never going to let you down.” The moon may be falling from the sky, but she’ll be there for you.

Precious few songs from her debut album were present, with Atkins saving most of the set for cuts from the new album. Which is okay, given that the two albums were both recorded in Sweden with producer Tore Johansson. Onstage, Atkins let the “Twin Peaks” mood of her music take over, with dark purples and reds lending an eerie atmosphere. And although she encouraged everyone to get up and dance, the night was more for sitting back, listening to her voice, the noir sounding anthems and leaving with both warmth and a chill in your heart.