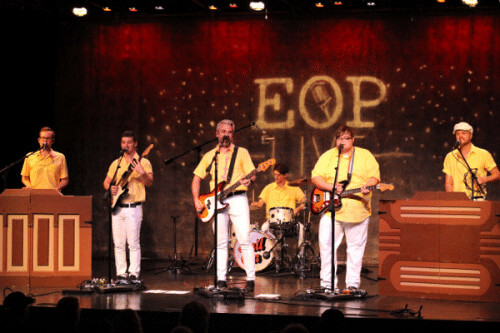 Hearing a Beach Boys tribute band is one of the last things on my bucket list. I must admit my love for them and my respect for Brian Wilson have grown immensely watching “Love and Mercy” and listening to Pet Sounds and SMiLE countless times.

I just didn’t want to hear songs about surfin’, cars and fun in the sun. It’s so…shallow.

And then there’s Mike Love. And “Kokomo.” Gag.

All of the above were present at “Sail On: The Beach Boys Tribute” at Eddie Owen Presents at the Red Clay Music Foundry in Duluth last night – except for the presence of the antichrist himself, Mike Love. Instead, a cheerful, genuinely nice Mike Williamson introduced every song (without the slaps and patronizing toward Brian Wilson) and took over Love’s nasally lyrics with authority and a much more palatable timbre.

Fun in the sun? Cars? Who cares? The group’s multi-part harmonies were spot on, Wyatt Funderburk hit every high note that Brian Wilson ever did, and the instrumentation was perfect, right down to Paul Runyon’s theremin sounds on his keyboard on “Wild Honey” and “Good Vibrations.”

The show was divided into two parts: early Beach Boys (surfin’, cars and girls), followed by a deeper dive into the group’s catalog (“Wild Honey,” “Darlin’,” “Sail on Sailor”). Granted, the latter half, for some reason, had to include “Kokomo” – I guess it’s like Skynyrd fans asking for “Freebird” – but despite the one horrible song, no one channeled John Stamos, and they played three songs from Pet Sounds and two from the elusive SMiLE, which more than made up for the song.

Guitarist and vocalist Matt Thompson said the first half, for all its apparent simplicity, is actually harder to perform. “Your mouth is constantly pasted to the microphone and you’re constantly making all these vocalisms,” he said. “The second half gives you a little more time to play your instrument and rest your voice.”

I enjoyed the deeper dive into the catalog, of course, but most of the crowd who danced to “409” and “Surfin’ USA” seemed to cruise right along to “Heroes and Villains” as well. And Runyon did an eerie imitation of Carl Wilson singing “Darlin’,” and even channeled short-term Beach Boy Blondie Chaplin on “Sail on Sailor” from Holland.

“We don’t try to put on wigs and silly costumes and try to imitate the Beach Boys,” said Runyon. “We try to give the essence of the group, right down to the harmonies and playing.” And they did that, concentrating on those close, intricate harmonies that made the Beach Boys who they were. Guitarist and organizer Jason Brewer, who with Williamson, Runyonn and Funderburk have played with the Explorers Club, gave amazing guitar performances and took a back seat vocally to Runyon, Williamson and Thompson.

Funderburk says they’ve given dozens of performances across the country and plan two more for today – so many, in fact, that Runyon says they don’t need to practice anymore, it’s so deeply ingrained in them. After last night, the sounds of the Beach Boys are ingrained in my head as well. And that, despite “Kokomo,” is a good thing.