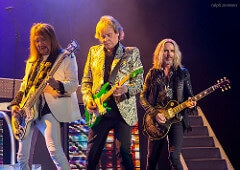 While looking for a band to play at my high school’s prom back in the 1980s, I noticed that the 1950s doo-wop sensation The Platters were available to perform. At our prom. This led to three thoughts:

Similar thoughts went through my head when I noticed that Styx was playing at Turner Field after the Atlanta Braves game:

The DeYoung-less band has been performing without their lead singer for over 10 years now. It’s the result of a long battle between him and guitarists Tommy Shaw and James Young over the direction of the band, DeYoung preferring concept albums and ballads, and the two guitarists backing classic rock. Since 1999, the three have been embroiled in legal battles. DeYoung has opted to perform with orchestras as “Dennis DeYoung performs the music of Styx,” while Shaw and Young have retooled Styx to perform as the original band.

And from the setlist at Turner Field, it’s clear that Shaw and Young have won. They performed all of Shaw’s hits – “Too Much Time on My Hands,” “Fooling Yourself,” and “Renegade,” and even pulled out the album filler “Miss America” so Young could sing as well. DeYoung’s “Babe,” “The Best of Times,” and the love-it-or-hate-it hit “Mr. Roboto” were nowhere to be found.

That’s not to say that the current lineup of Styx can’t do without DeYoung’s influence. Lawrence Gowan is like the replacement lead singer(s) for Journey – he does a great Dennis DeYoung impersonation, and he performed admirably – mimicking DeYoung’s trademark vibrato for “Come Sail Away” and “Lady,” and going over the top in his stage theatrics (Do you really have to play the keyboards backwards again?).

At 58, Tommy Shaw looks and sounds like he did at 28. He hasn’t lost any energy, and truly seemed to be enjoying Styx without DeYoung. It was clear that he was now the leader of the band. Former bassist Chuck Panozzo came onstage to play for a few songs. And slowly but surely, the band melted my skepticism and I became 10 again, singing along with “Come Sail Away” and “The Grand Illusion.”

Still, something was missing. I knew what it was the moment the band walked off the field (no encore), with many around me yelling for “Mr. Roboto.”