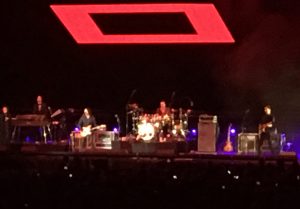 Yes, those blobs really are Tears for Fears.

In the 80s, we fought another revolution against the British. Only this time, the Brits were planning a musical invasion of the United States – the second one in 20 years. Bands such as Culture Club, Duran Duran and Frankie Goes to Hollywood took the country by storm, challenging such domestic acts as Bruce Springsteen, Madonna, Michael Jackson and Prince.

Their weapon of choice was New Wave, and they wielded it with such precision and destruction that we could barely hold our own on the Billboard Charts. The foreigners eventually retreated, leaving us with heavy metal and hip-hop. Oh well. So much for the golden years.

A now familiar trend has developed in which old 80s acts will tour with each other in one blast of nostalgia; you’ll see Styx with REO Speedwagon and Foreigner, Howard Jones with Paul Young and Katrina and the Waves. Sunday night at Infinite Energy Arena, it was Tears for Fears with Daryl Hall & John Oates. And although they were double-billed, it still seemed like I had to compare the Brits with the Yanks. And in this case, the Brits won by a landslide.

Tears for Fears performed first, which in billing means that they were the opening act. And after 35 years, they still sounded as sharp as ever; Roland Orzabal sounded just like he did when he sang all those hits from the 80s. (Curt Smith was a little pitchy at times, to quote Randy Jackson.) They performed all their hits – both the oldies and the newer songs, which are Beatlesque in nature. “Everybody Loves a Happy Ending” is “A Day in the Life” revisited, complete with alarm clock and different suites. The duo also performed “Sowing the Seeds of Love” to such perfection that it’s now my favorite Tears for Fears song.

Orzabal led a cover of Radiohead’s “Creep” and showcased his vocal range; the rendition sent chills down my spine. The group also performed a number of songs from their first album, The Hurting, which unfortunately was lost on most of the crowd, who was there to hear “Shout” and “Everybody Wants to Rule the World.” My only complaint was they didn’t play long enough, but they had to make way for Mssrs. Hall and Oates.

And what a disappointment they were. 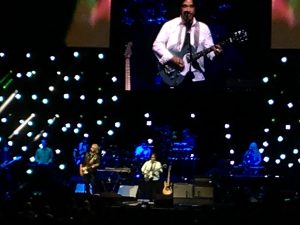 Sounding nothing like their polished sound on records, the duo ad-libbed their way through most of their hits. Now I know that after playing “Maneater” 1,500 times, you’re bound to make some changes. But at times, the songs didn’t even sound similar to the original, and both Hall and Oates changed the melodies so much there was no way to sing along.

It was about this time that I realized I never really liked Daryl Hall & John Oates. Much of their success can be pointed to the glossy sounds they made in the studio. Granted, I’ve heard they can give a good show without all the vocal changes and instrumentation, but this was not that night. It didn’t help that the sound system was terrible; I counted instances of feedback seven times during the set.

The only time the ad-libbing worked was during the walk through the 70s, with their early hits “Sarah Smile” and “She’s Gone.” The Philly soul sound really came through and was quite enjoyable. But then they launched into “I Can’t Go For That,” and instead of the groove of the synthesizers providing the beat, they turned it into a rock-soul number that was disappointing. By the encore, which featured most of their big hits (“Rich Girl,” “Private Eyes,” and “You Make My Dreams Come True”), they had gone back to their ad-libbing and vocal acrobatics.

The Brits dominated the airwaves during the early- to mid-1980s, and at Infinite Energy Arena, they dominated again. God Save the Queen.