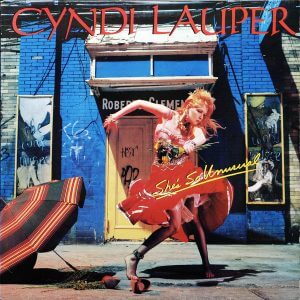 Cyndi Lauper took the U.S. pop scene by storm in 1983 with her album She’s So Unusual. What was so unusual was the makeup of the songs on the album: a majority of the songs were covers.

We’re not talking about songwriters that wrote tunes exclusively for Lauper a la the Brill Building. We’re talking about songs that were written and previously recorded by other artists – most of which failed miserably and were unknown to the rest of the world.

Of the 10 songs on She’s So Unusual, six were covers of other people’s songs; Lauper co-wrote the other four with various collaborators (for some reason, “She Bop” – the simplest, most mundane song on the album – took four people to write). Lauper released six songs from the album; four of the singles were covers. Here are the songs that Lauper covered:

This post is not meant to belittle Lauper’s release in any way; indeed, the way she reinvented these songs, in addition to her strong and, um, unusual voice, made She’s So Unusual a monster hit. The album won critical acclaim, reached #4 on the Billboard album chart, stayed on the charts for 77 weeks and sold 6 million copies. It and its singles were nominated for six Grammy award nominations (two wins).

It’s easy to cover a song like “Stand by Me” or “Yesterday” – you get instant recognition, but you’re always compared to the original. It takes guts to find a dusty old single, make it your own, and release it, knowing that it failed the first time. But no one (except me!) can come behind you and compare the original with the remake. It’s yours.

That’s not bad for a girl who looked like she bought her clothes from a flea market – and got most of her songs there as well.