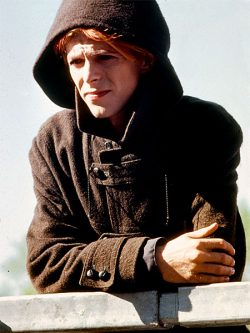 Seeing those words still doesn’t make it real for me. David Bowie seemed ageless, timeless, always changing with the times and even making up his own time. Even at 69, he seemed 40.

Perhaps that’s because that’s when I discovered him. He was 36 when he released “Let’s Dance,” perhaps his poppiest tune ever, much to the chagrin of long-time fans and critics. I knew him as somewhat of an oddity (Not a space oddity yet) – I vaguely remembered “Fame” from 1975 and hated it – but found his album and subsequent singles infectious.

During this phase of his career, he was dressing snappy and debonair – no space suits or dresses then, and he seemed so, well, for lack of a better term, cool. I wanted to be David Bowie. I got my hair cut like his, started wearing ties to school (which won over a lot of rednecks), and immersed myself even further into the British music scene.

The gentleman who rocked

You may wonder why David Bowie’s hair and dress influenced me so much. In your mid-teens, you search for some type of identity, something to connect with. And growing up in northeast Georgia, I was having trouble finding that identity. Something about Bowie, a gentleman who rocked, struck a chord with me. I wanted to be a gentleman who rocked.

Bowie’s Let’s Dance set the stage for 1984’s “Blue Jean,” which I absolutely flipped over. Now that I go back and listen to it, it pales in comparison to his three singles from Let’s Dance. But it was Bowie, and I didn’t care. I bought anything he put out for the next 6-7 years, including “This Is Not America” from the movie The Falcon and the Snowman. As he aged, the suits and hair changed, but not as drastically as they did during the 1970s, and he settled into middle age looking like the gentleman who rocked.

Many dismiss his 80s output, preferring to concentrate on his 70s albums as his classic phase. It’s when he blended music, art and fashion together into one form, daring to cross lines that had never been approached by artists. And while I did go back, rediscover and fall in love with his early 70s albums Hunky Dory and Ziggy Stardust, I found most of his other material from that decade difficult to listen to (and “Fame” is still tuneless tripe). To me, David Bowie was the suave entertainer from the 80s. That’s how I’ll remember him.

Here he is in the video for “Loving the Alien,” the opening cut to his 1985 album Tonight. Strange video, but the song features a wonderful chorus, and Bowie is looking straight out of GQ.