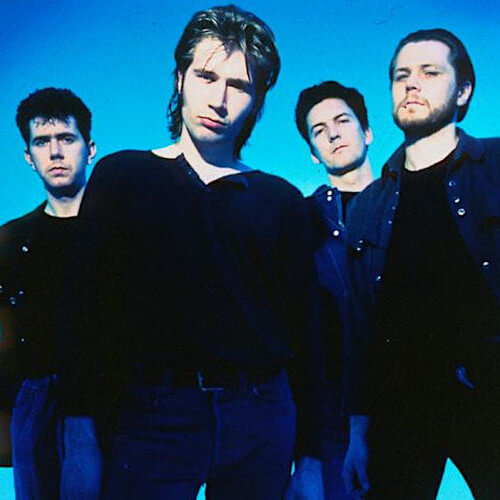 I recently finished the biography of Del Amitri, a book called These Are Such Perfect Days by Charles Rawlings-Way. It’s a detailed account of the rise and (ultimate) fall of the band from Glasgow, Scotland that had only one U.S. Top 10 hit, the short, jaunty “Roll to Me.” Here it is, if you can’t remember it:

Yeah, that one. The one that makes you hum it incessantly and, at just over two minutes, is over before you know it.

The rest of their U.S. career — and most of their career across the pond — was spent fighting anonymity, despite single after wonderful single — “Kiss This Thing Goodbye,” “Nothing Ever Happens,” “Be My Downfall,” “Always the Last to Know, ” “When You Were Young,” “Driving with the Brakes On,” “Tell Her This,” “Not Where It’s At,” and “What I Think She Sees,” to name a few. In all, they released six studio albums and 21 singles in 17 years. Only four of those 21 singles hit the U.K. Top 20, and none reached the Top 10.

But Justin Currie, Iain Harvie and their revolving door of other band members had a knack for melody that extended past their singles onto their B-sides. They even put out a compilation of B-sides, Lousy With Love, that was bursting with so many sublime songs they put most greatest hits albums to shame. They were that good.

So who were they?

Del Amitri – From a Different Cut

Del Amitri formed in Glasgow in 1980 and after the first of several lineup changes, they were signed to Chrysalis Records in 1984. They released their first LP, Del Amitri, one year later. It was jumbled and eclectic, and Currie had not found his husky crooning voice yet. It failed to chart.

It wasn’t until 1989’s Waking Hours that the band settled into their genre — country-twinged pop with bittersweet lyrics set to memorable melodies. I still remember seeing the video for “Kiss This Thing Goodbye” for the first time and marveling at the way the song centered on a few chords and Currie’s voice, with a banjo (banjo!), steel guitar and harmonica providing some accompaniment to the sing-song melody. Those have to be three of my least favorite instruments, but Del Amitri used them as accents to create a beautifully vibrant pop song.

The second single did nothing as well. But the third time was the charm; their next single from the album, “Nothing Ever Happens,” caught on in the U.K. and Ireland, reaching No. 11 and No. 4, respectively. (“Kiss This Thing Goodbye” was then re-released, but it reached only No. 35 in the U.S. and No. 43 in the U.K.)

Undaunted, Del Amitri followed up Waking Hours with 1992’s Change Everything and released “Always the Last to Know.” It was a straight-ahead pop song with the textbook I-vi-IV-V chord progression that was addictive. It also had the misfortune to be released about a year after Nirvana’s “Smells Like Teen Spirit,” the most important single of the last 25 years. “Teen Spirit” changed music forever, and no one wanted to hear melodic songs anymore — just barbaric yawps from guys in flannel shirts. Pop groups such as Del Amitri and Jellyfish were left in its wake.

Falling Between the Stools

It’s really a miracle, a freak occurrence that “Roll to Me” actually hit No. 10 in America in 1995. It was on the charts at the same time that Mariah Carey’s “Fantasy” and Coolio’s “Gangsta’s Paradise” ruled the charts — a musical anachronism in a landscape ruled by Auto-Tune and “flow.” Del Amitri crawled its way up the charts unnoticed, reaching only No. 22 in the U.K. The group wouldn’t hit the U.S. Hot 100 again.

The album, Twisted, didn’t fare as well, reaching only No. 170 on the U.S. album chart, even with four singles released. They kept churning the albums out, though, releasing Some Other Sucker’s Parade in 1997. In 2002, they released a greatest hits compilation called Hatful of Rain along with the aforementioned B-sides album, Lousy with Love. A new single, “Don’t Come Home Too Soon,” was written to celebrate the Scottish soccer team going to the 1998 World Cup. It went to No. 1 in their native country.

Shortly after their commercial disappointment Can You Do Me Good? in 2002, they were dropped from A&M, which had been swallowed up first by Polygram, then Seagrams and then Vivendi — and subsequently called it quits.

So why didn’t these songsters make it? Rawlings-Way has a few ideas. Besides the aforementioned revolution in pop music, he points to the “corporate cannibalism” of record labels being bought up by large businesses whose concern was the bottom line, not artist development.

Del Amitri was also uncategorizable. Their music “fell between the stools,” as Rawlings-Way quotes Currie as saying. “They couldn’t be categorised as pop lightweights like Matchbox 20; they weren’t scruffy alt-rockers like the Gin Blossoms; they weren’t art-school introspectives like R.E.M. or Radiohead . . . What the hell were they?” Rawlings-Way finally decides that they were country, but the country they were from was Scotland. And that didn’t work.

But the story has continued. Justin Currie, he of the mutton chops, released four albums between 2007 and 2017 as a solo artist. Harvie studies music and writes scores while helping his old friend record his albums. And they are about to release their seventh studio album, titled Fatal Mistakes, in 2021.

They are older and grayer now, but they still know how to write a memorable song. And while they appreciate their long trip under the radar — 22 years of playing and releasing albums — fans wonder what went wrong and curse the record companies and record-buying public for their fickleness and overall bad taste.

7 thoughts on “Del Amitri: The Best Unknown Band Ever?”