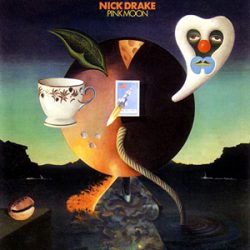 I pride myself in knowing the hidden gems in music – the best-kept secrets, the unknown legends.

Imagine my surprise and embarrassment when I heard Nick Drake for the first time in a Volkswagen commercial.

You may have seen it: a group of twentysomethings driving around on a beautiful moonlit night, listening to the peaceful sounds of “Pink Moon” and Nick Drake’s haunting voice. They arrive at a party and see all of the loud, boisterous people milling about, and decide to keep driving. (I now wonder if they kept driving because of the beautiful night, the smooth ride of the Volkswagen, or Nick Drake.)

Nick Drake had been hidden from most everyone for almost 30 years. A painfully shy and chronically depressed individual, this British folksinger released three albums in four years that sold only a few thousand copies each. He then died mysteriously in 1974 after overdosing on some prescription drugs he was taking for depression. Some suspected it was a suicide.

For years his music lay unnoticed, but after Volkswagen used “Pink Moon” in its commercial, record sales surged. He is more popular now, 35 years after his death, than he ever was when he was alive.

Amazon.com describes Pink Moon, his last album, as “the sound of Nick Drake cracking up.” Indeed, it is a melancholy release – simply Nick Drake and his guitar. Supposedly, Drake went into the studio, told his producer to start the tape, and proceeded to run through all 11 songs without saying a word. His depression seemed to have overtaken him, and within 24 months he was dead.

This story makes Pink Moon sound like the soundtrack to a nervous breakdown. And if you know the singer’s background, it does seem to be an eerie epitaph on an ephemeral career.

“Horn” is a sad instrumental, consisting of single notes crying out over a droning bass line. In “Parasite,” he proclaims, “And take a look you may see me on the ground / For I am the parasite of this town.”

But after several hundred listenings, I am convinced that this album is uplifting. Pink Moon may have been Drake’s attempt at musical therapy, shedding all complicated production and added noise to create the most personal music to deal with his troubled mind.

The title track is a peaceful but quiet number that rolls on, interrupted occasionally by a spare piano (the only song in which another instrument is featured). Drake used alternate tunings on his guitar, which gives his songs a unique sound. His gentle strumming and quiet voice create the most intimate atmosphere, as if he were playing right beside you.

By the album’s finale, when the complicated fingerings of “From the Morning” begin, you find yourself smiling, hoping that at that moment in the song Drake was happy inside as well. His lyrics support this: “A day once dawned, and it was beautiful,” he sings – an optimistic line from an otherwise depressed individual.

At 28 minutes, Pink Moon is just long enough to keep you satisfied without getting overly despondent. And you don’t need a Volkswagen to listen to it.