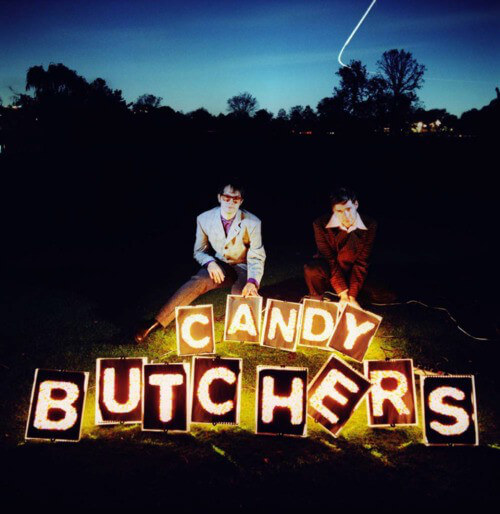 My discovery of Mike Viola and the Candy Butchers and their unreleased demos is a story for the ages, one that involves hidden treasures, research and intrigue.

First, the background. In 1996, the Candy Butchers had just released an EP, Live at La Bonbonniere, under Blue Thumb Records, and were putting the finishing touches on their debut self-titled album. Things were looking up for Mike Viola and Todd Foulsham.

Then Blue Thumb Records went belly-up, and the band’s debut LP was buried along with the label.

Fast forward about a year. I had heard rumblings of this new Beatlesque band called the Candy Butchers, and while on a trip to my favorite used record store, I found Live at La Bonbonniere among a pile of bargain CDs. I think I paid $2 for it.

Driving home with my new purchase in the CD player, I was stunned by the exuberance and spontaneity, not to mention the musicianship of the duo, which sounded like a full band playing. I screamed in my car (to no one in particular), “Who the hell are these people??”

Like R.E.M., U2 and the Innocence Mission before them, the Candy Butchers became my new obsession.

I poured over websites and email list archives trying to find out information about the group and found precious little. And then after several days of looking (Google wasn’t what it was today), there it was, on a single web page — an entire album of unreleased material. The mythical Blue Thumb Demo.

I patiently waited for my 28.8K modem to download all 12 songs. And when I began playing them, I found that each song was a newly discovered gem, unheard to 99.98 percent of America.

“Love’s Long Sleep” had a twist and turn at almost every phrase. “What I Won’t Give” was a prototype of a Beatles song. “Love’s Long Sleep” was so joyous, with a bridge that culminated with a smashing chorus as Viola, who has marveled at his lover’s love and dedication, proclaims, “Oh now I live, I live and die for our love.” And the fourth song — yes, we’re only on song four — “I Will Not Be Afraid” sounded stark but was supplemented by Foulsham’s syncopated drum beat and Viola’s unforgettable melodic phrasing.

And it didn’t fall in quality. From the intimate acoustic ballad “I’m Not Over You” to the twang of “Truckstop Sweetheart,” there wasn’t a bad track on the whole album. And this was shelved while Hootie and the Blowfish went multi-platinum? Sigh.

Recently, Viola, who is now a solo artist with a small but fervent following, released the Blue Thumb album on his own to a small group of fans on Facebook. He’s remixed some of the songs, and it sounds more polished now. I now have my own copy and can give him a monetary thank you. But I still treasure the original demos, the album that almost was.