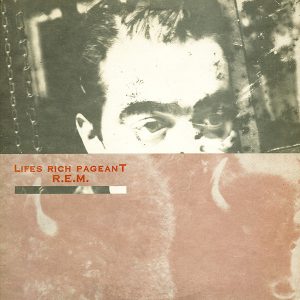 By 1986, the early 80s world of pop icons such as Duran Duran, Journey and Wham! were falling out of favor, and the new breed – Mr. Mister, Bon Jovi and Whitney Houston – already sounded tired and uninteresting. I had already begun searching for new material, having discovered U2, and as I entered college that year, I was ready to jump out of the pop music world and into the underground.

My first exposure to R.E.M. and Lifes Rich Pageant came in a record review that appeared in my college’s student newspaper. The review heaped praises on the album, even calling the song “Fall on Me” one of the greatest songs ever written. I laughed at this hyperbole; R.E.M.? Weren’t they drug-addicted punk rockers who never bathed?

Things changed, though, when my friend Robby bought the cassette and commanded me to get in his car and listen to the new R.E.M. album. Immediately. I was unsure, feeling like those kids in the after-school special who are faced with smoking a joint for the first time: Should I really listen? It seems like everyone else is doing it… But given that Robby had perfect taste in music, I put myself in his hands – and his car.

Lifes Rich Pageant a hit from the opening bars

Lifes Rich Pageant hit me on the head with a 2×4 from the opening song. “Begin the Begin” – um, began with a guitar riff from Peter Buck and slammed into a minor key with a heavy drum beat. In fact, five of the 12 songs were in minor keys, which gave the entire album a dark, brooding feeling. Lead vocalist Michael Stipe’s rough growl fit perfectly with the somber mood.

Although most of the album breathed fire and flew at 70 mph. I would discover later that this was a break from R.E.M.’s Byrds-like sound of the early 80s. But I liked it. It was not scary. It was musical and surprisingly accessible.

The great songs continued. “The Flowers of Guatemala” – well, I’m still not sure what that song is about, but I enjoyed the slow pace of this ballad – yes, ballad! I saw “I Believe” as a creed, even though Stipe’s beliefs were unusual (“I believe in coyotes and time as an abstract…I believe my throat hurts”). And just when you thought the album was getting too deep and introspective, they end the album with “Superman”, a tongue-in-cheek romp through the world of bubblegum music.  “I am, I am Superman, and I know what’s happening!” Stipe cried, with Mike Mills singing in perfect harmony.

I had to grudgingly admit that the record review was right, not only with the album, but with “Fall on Me.” It was not a fast-paced punk rock song, but a folk anthem, with a soaring chorus and a hint of a political theme (Nuclear war? Acid rain?). It was the finest moment of the album, and is still one of my favorite R.E.M. songs.

My friends and I grew to hold this album in the highest regard, and it became a cult classic; such lyrics as “Miles Standish proud” and “Tiger run around the tree” (“Begin the Begin”), “What noisy cats are we” and “Hey captain don’t you want to buy some bone chains and toothpicks?” (“Swan Swan H”) entered our vernacular. (These lyrics were bizarre, but at least you could understand them. I quickly learned from earlier albums that Michael Stipe’s singing used to be unintelligible.)

Looking back now, my reluctance to listen to R.E.M. seems comical, especially given their worldwide following and multiplatinum albums. (They even appeared on “Sesame Street,” for goodness’ sake.) This group was harmless, and I bought their back catalogue and discovered the joyous folk-tinged Murmur and the murky Fables of the Reconstruction. Green and Out of Time still lay fallow, waiting a few more years to be released.

As their popularity grew to include a Top 10 single (“The One I Love”) and a Grammy award, I could scoff at the “newcomers” and tell of the days of Lifes Rich Pageant. I was not on the floor of the 40 Watt Club in 1980, but I was just ahead of the wave – a position I grew to enjoy.