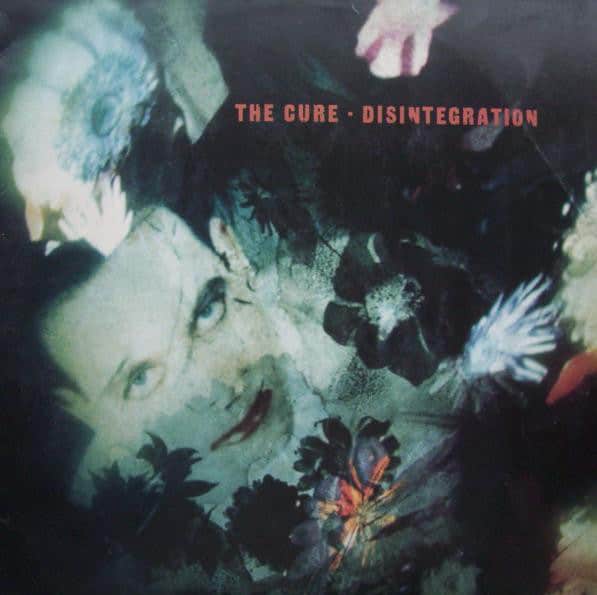 If you’re ever deserted on an island, with little hope of rescue, you’d want albums that would keep your spirits high and help you hope for the future. So I have to admit that Disintegration would make a lousy album to have with you; within two weeks you’d hang yourself from the nearest palm tree, or bash your head in with a coconut.

Disintegration is spooky, sometimes angry, but most of the time it’s extremely depressing. The BBC described it as “taking a long bath in someone else’s despair.” That being said, it’s one of the best albums of the late 1980s, it cemented the Cure as The Goth Band of the era, and it contains a certain beauty in its sadness and misery.

A cacophony of chimes announces “Plainsong,” the opening cut on Disintegration, and it swells into a wondrous wall of synthesizers with a solemn drum beat every measure — almost like a glorious funeral march. A single guitar plays a melody over the synthesizers as lead singer Robert Smith is already alluding to death — “It’s so cold, it’s like the cold like you were dead,” he complains. But the music is so majestic, you almost wallow and revel in the sadness.

The album is full of contradictions; when the music is uplifting, as in the lovely ballad “Pictures of You,” Smith laments over a girl, looking at the pictures and remembering the times he had with her, only to find out that he’s so miserable over her loss that he rips the pictures apart. Ouch.

Other times, the sentiment is there — “Lovesong” is the first true love song he ever wrote, but it’s in a minor key, and the mood is almost despondency as he promises he will always love her, “however far away.” “Lullaby” sounds nice and has a snappy accompaniment, but Smith’s whispering voice makes it sinister, and the lyrics recounts one of Smith’s boyhood nightmares about a spider having him for dinner.

But mostly, Disintegration is a mood album, and that mood is bleak. On most of the tracks, Smith lets the band set the mood for a few minutes (most tracks are over 5 minutes long, with “The Same Deep Water as You” plodding along for over 9 minutes) before his wailing and moaning begin. The aforementioned “Same Deep Water” has the same drumbeat as “Plainsong,” but the mood is much more subdued and introspective as synthesizers create an atmosphere of solemnity.

As I mentioned earlier, though, there is beauty in sadness, and so much can be said in just the music. “Untitled” begins with a simple accordion-like sound before the now-familiar guitar and synthesizers kick in, and Smith admits never knowing how he wanted to feel. “Never quite said what I wanted to say to you / Never quite managed the words to explain to you,” he says, knowing that “now the time has gone.”

And with that, 72 minutes of despondency, shoegazing and self-pity are also gone. Disintegration is not a feel-good album, but it’s cathartic, and you’re emotionally spent after the accordion sound closes out “Untitled.” The Cure knows sadness, and perform it perfectly.