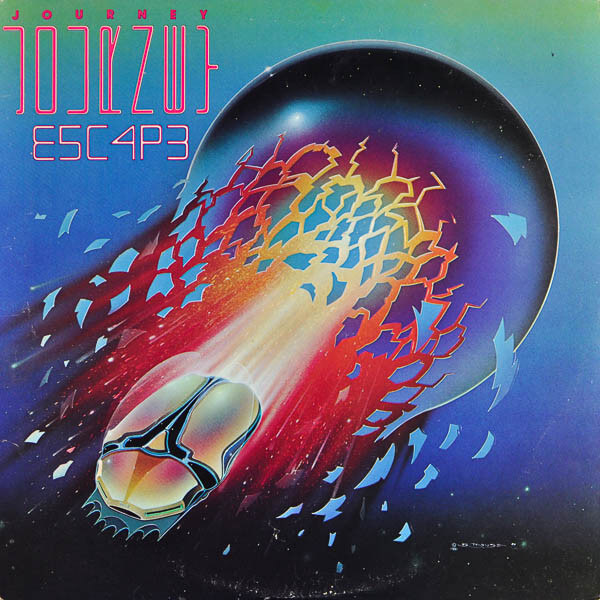 I feel as if I have to defend Journey’s Escape — of all the records ever recorded, this would be one of the top 20 that I would play incessantly on a desert island?

But you can’t argue with their chart success, and 1981’s Escape was the first Journey album to bring together the successful songwriting trio of Perry, guitarist Neal Schon and keyboardist Jonathan Cain, formerly of the Babys. It was polished, accessible, and tossed enough meat to the hard-rock loving fans on several songs.

The opening cut is by far the most popular song. “Don’t Stop Believin'” was a Top 10 hit when it was first released, but then in 2009 its popularity went through the roof with its inclusion in a “Glee” episode. It debuted at No. 4 in the Hot 100 and for a time was the biggest selling song on iTunes ever. Allmusic describes it as a “perfect rock song”, featuring “one of the best opening keyboard riffs in rock.” Its coda took the song in an unpredictable direction, fading away but not until it burned its many melodies into your brain. You find yourself singing along, straining to reach Perry’s high tenor voice (and failing most of the time).

Some songs haven’t aged well — “Who’s Crying Now” gave us a peek into post-Escape Journey, when Cain and Perry took over most of the songwriting duties and led the group down a more pop, mid-tempo direction. “Open Arms” was a nice power ballad that, like “Don’t Stop Believin’,” featured a memorable opening piano introduction but saccharine lyrics (“Softly you whisper, you’re so sincere / How could our love be so blind?”). But it was Journey’s biggest hit at the time, climbing to No. 2, and it got overplayed by both classic and lite rock stations.

What makes this album so satisfying, then? It’s the non-single tracks. The second cut, “Stone in Love,” begins with a powerful guitar riff that’s reminiscent of AC/DC. It’s almost a Southern rocker (“In the heat with a blue-jean girl”), and the trademark Journey harmonies echo through the soaring chorus. “Keep on Runnin'” is a fast-paced rocker as well that shows that the band can rock when they want to. Other power ballads were only minor hits but challenge “Open Arms” in their beautiful and memorable melodies (“Still They Ride” and “Mother, Father”).

But the most important reason I have this album on my list is that I was 12 when it came out.

Escape – The Soundtrack of my Teenage Years

I was just becoming obsessed with music at that age. Escape was one of my first obsessions; three years later when my friends and I could drive, we were still playing this cassette as we cruised the towns of north Georgia. It takes me back to those all-important, character-building teenage years, when we sang along with Steve Perry and thought that “Don’t Stop Believin'” was an important mantra. Yeah, the cool kids around the world were listening to The Cure, The Clash and Roxy Music, but none of the stations whose signals made it into Appalachia played New Wave yet.

I won’t have a car with a cassette player on my desert island. (That also begs the question of how I would play a CD or LP on a desert island.) But if I did, I’d sit under a coconut tree and remember the times when life was easy, and I was a teenager and didn’t have a care in the world.

And I’d also try to figure out how to get off that damn island.