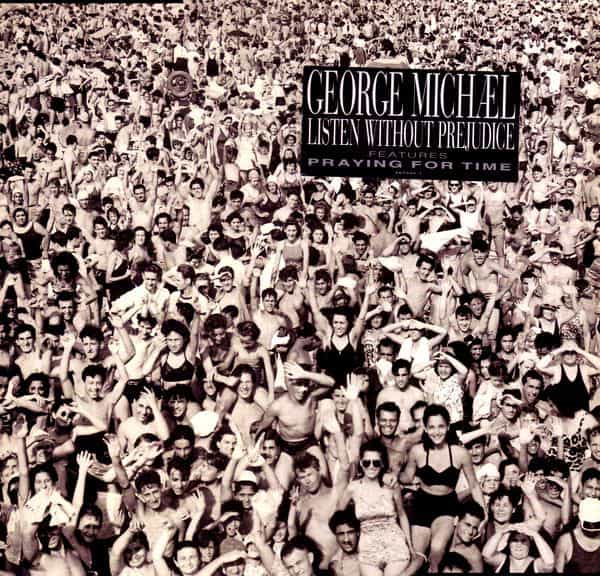 Poor George Michael became an afterthought in pop music, an artifact from the 80s and 90s and a punchline to many jokes in a manner previously reserved for Michael Jackson, R. Kelly and Milli Vanilli. Besides the infamous rest stop incident, his career has not been taken as seriously as it should, given Wham’s rather dated hits such as “Wake Me Up Before You Go-Go”, ” Careless Whisper” and the sappy “Last Christmas.”

Michael must have thought so as well, for in 1990 he released Listen Without Prejudice Vol. 1, his attempt to be taken seriously as a singer-songwriter. He was coming off the mega-million selling Faith and the juicy controversy over “I Want Your Sex,” but success and stardom weren’t enough. Even the title, Listen Without Prejudice, was a command, or a plea, to music fans to put all preconceived notions about him aside.

“Praying for Time” — well, I’ve already waxed poetic about this song before. It’s the opening cut off the album and makes a bold statement that things will be different this time. It’s chilling and beautiful. He continues with “Freedom! ’90,” a more upbeat song typical of some of his Wham! material — even the title gives a nod to their 1984 hit “Freedom!”. But Michael is more cynical six years later, recognizing that fame is not all it’s cracked up to be:

Heaven knows I was just a young boy
Didn’t know what I wanted to be
I was every little hungry schoolgirl’s pride and joy, and I guess it was enough for me
To win the race? A prettier face!
Brand new clothes and a big fat place on your rock and roll TV
But today the way I play the game is not the same, no way
Think I’m gonna get myself happy.

And while Michael occasionally lapsed into “Careless Whisper” mode with ballads such as “Mother’s Pride” and “Cowboys and Angels”, his style was more acoustic, more singer-songwriter than pop star. It showed; Listen Without Prejudice Vol. 1 sold only 8 million copies as opposed to Faith‘s 25 million (italics added for sarcasm).

But even though the songs on Listen Without Prejudice Vol. 1 were less groovy and more guitar-centered, they still managed to deliver hook after hook. “Something to Save” was a simple, positive song that elicited a smile with every listen. “Waiting for That Day” evoked the Rolling Stones’ “You Can’t Always Get What You Want,” and a reprise of the song ended the album — a slower, more personal version in which Michael bared his innermost thoughts, confessing that success had “emptied his soul”:

You look for your dreams in heaven
But what the hell are you supposed to do when they come true?

Well there’s one year of my life in the songs
And some of them are about you
Now I know there’s no way I can write those wrongs
Believe me, I would not lie, you’ve hurt my pride
And I guess there’s a road without you

But you once said, There’s a way back for every man
So here I am
Don’t people change? Here I am
Is it too late to try again?

1990 was my first year out of college; I had a job and an apartment, and my taste in music had matured from Top 40 to more obscure singer-songwriter artists. But Michael was trying desperately to do the same thing. Listen Without Prejudice served as a bridge between the hook-laden one-hit wonders of the 80s and the hook-laden power pop I would eventually find during the 90s. My new friends in music seldom reached the Top 40; sadly, the 90s found Michael appearing less and less at the top of the charts until he disappeared completely. Precious few artists get the respect and success they deserve.