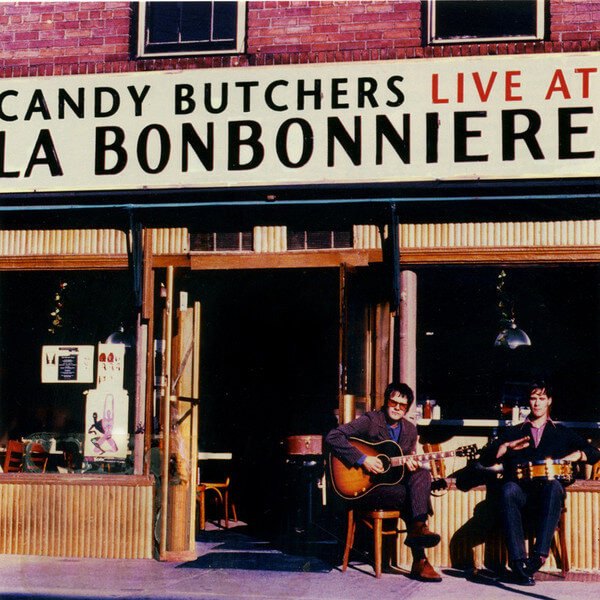 I bought the Candy Butchers’ Live at La Bonbonniere on a whim at a used-record store one day, having heard something about them in a music discussion group and thinking that with a name like “Candy Butchers,” they’d have to play sweet, sugary music. Besides, it was only $3 and had five songs on it. I wouldn’t have that guilty feeling about buying a crap CD because I had invested so little time and money on it.

I got so much more.

Live at La Bonbonniere sent me down the rabbit hole of power pop music — music that sounded like my musical idols, the Beatles. It’s a frustrating CD — the sound of what would happen if a perfect band made the perfect sounds, and no one was there to hear it. Granted, you can’t stuff too many people in La Bonbonniere restaurant in New York City — it’s a burger joint/snack bar with lots of tables — but you can actually hear individual hands clapping their appreciation after every song, with a few people yelling out requests.

Mike Viola and Todd Foulsham were on the verge of stardom when they recorded this record. Viola, a superkid who was in his own band when he was in his teens and who recently became famous for being behind the voice of the Wonders’ “That Thing You Do!”, from the movie of the same name.

The two had formed a band called the Candy Butchers, and they were about to release their eponymous debut LP right on the heels of “That Thing You Do!” This live EP was created to generate some buzz around the LP.

The opening track, “Bells on a Leper,” is about as energetic and frenzied as two artists can get playing together. With Viola on guitar and Foulsham on drums, Viola sings with his crystal clear voice that sounds like he’s taken one too many shots of whiskey, containing just enough raspiness to make it needy and heartfelt.

They won me over with the two songs in the middle. “California Girl,” a three-minute ode to a girl who “soaks up too much sun.” The melodies lilt, the keys change, and your smile grows at the pure genius of the tune.

Even though their music is sublime, Viola’s lyrics are biting. On a sunny song such as “California Girl,” Viola tells the girl, “The sun and surf are laughing at you.” “Cupid Complained to Venus” contains the following morbid verses:

No matter. They’ve constructed such wonderful sing-along music that you’ll chime along to any words. They hit their peak with what may be the perfect pop song, the oddly named, “Till You Die.” With inventive chord changes and the snappy snare of Foulsham, Viola sings, “Do you love me? Think of me now while you’re carving out my heart.” The chorus has such an inventive chord progression that I listened to it over and over in the car, wondering how they did it. It made me ache.

I played the five songs from the Candy Butchers’ Live at La Bonbonniere over and over and searched the internet for their debut album. Sadly, Blue Thumb, their record label, went belly-up before it was released, making it forever known as The Blue Thumb Demo. I found the demo online and was treated to 10 new songs, many of which contained the same melodic phrases as “Till You Die.” Who was this guy?

Since 2005, he’s been releasing records under his own name, each one becoming a little more eclectic than the other. I prefer the small, two-piece sound of a group playing to no one. If a band plays in a restaurant and no one’s there to hear it, do they make any noise? Luckily they do.