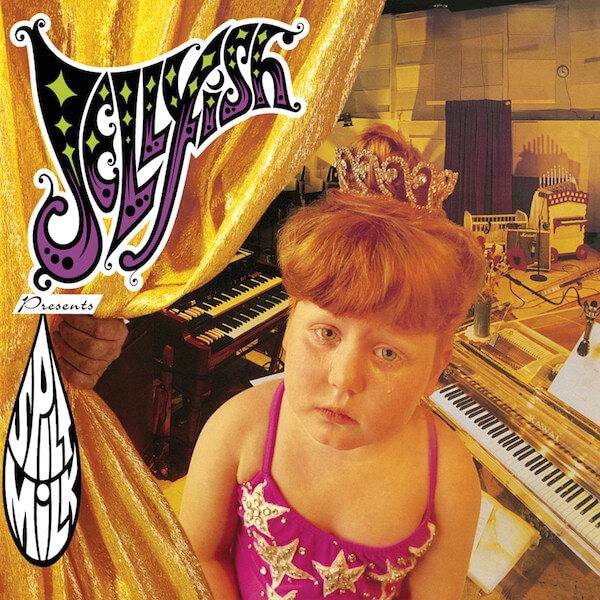 When Jellyfish released their second album, Spilt Milk, in February 1993, critics didn’t know what comparison to make of the band. They had released their first album, Bellybutton, to rave reviews and even had a Top 40 hit with the catchy “Baby’s Coming Back,” which wasn’t even one of the better tracks. The melodies flowed, the harmonies shook you down to your core.

A friend of mine introduced me to the band, handing me a copy of “The Glutton of Sympathy” on cassette and saying, “You’ve got to listen to this.” I found a somber acoustic ballad that added layer upon layer, with a hopeful chorus and a bridge that sounded Beatlesque. The lead singer sounded like a rock n’ roll singer. Who were these guys?

I quickly bought Spilt Milk and was floored by what I heard. Jellyfish, in a sense, had out-Beatled the Beatles. It was Queen meets ELO meets Pet Sounds-era Beach Boys meets 10cc – all of the band’s idols rolled into one album.

But then I heard circus music. And kids singing playground chants. And a polka. And a lullaby. I gave up; who the hell did these guys think they were?

Spilt Milk was an ambitious, innovative, bombasatic album that tested the limits of pop music and, at times, the human ear. It began with a music box fading in, a rush of instrumentation a la “A Day In the Life,” stopped suddenly by a sweet a cappella lullaby. “Hush,” with atmospheric harmonies reminiscent of the Beach Boys. It was a stunning way to start an album.

Then, as soon as you were relaxed and asleep, BAM! A heavy metal guitar riff interrupted your dreams and introduced a … piano? … as lead singer Andy Sturmer launched into “Joining a Fan Club,” a glam-rock-era tribute to a fallen rock star and his fans. This song had it all — guitars racing, feedback, several key changes and at least eight, maybe 16 voices at once. Ear candy.

“Fan Club” was followed by “Sebrina, Paste and Plato,” a rock operetta that began with a tack piano reminiscent of a children’s television show. The playful verse was followed by a rousing refrain that sounded like a bar full of drunken sailors, which was answered by a child’s voice saying, “Kool-Aid, sandwiches and chips for all the shoulders!” The drunken sailors replied, “Lunch is on the table, soon dessert is on the floor!”

But then the chorus, the lovely, bouncy sing-song chorus took over (“So serene, Sebrina makes me feel so serene …”), found its way into your heart, and you didn’t have a care in the world anymore. By the end of the song, I was dizzy from the short, manic trip, and I didn’t care what the lyrics meant.

The genius of Spilt Milk was in the first six songs – one masterpiece after another. “New Mistake” provided a lanscape of guitars that sounded so bittersweet, complemented by a 10cc-like chorus. “Glutton of Sympathy” was the classic ballad that was made for radio but never found its way into listeners’ ears. It was followed by the real single, the ill-fated “The Ghost at Number One” – Queen resurrected. All that was needed was Freddie Mercury, and even Sturmer’s strong voice held up well to those comparisons. Then in the same song, I heard a bridge in a different key that turned the whole track upside down – multi-layered harmonies over a harpsichord.

The rest of the album continued the voyage through the looking-glass. “Bye Bye Bye” was a polka, complete with accordion and oom-pah-pahs. “All is Forgiven” was a thundering, wonderful, noisy anthem accentuated occasionally by a complete stop in the music, where operatic, falsetto Queen/ELO harmonies filled the void for just two seconds at a time. The song ended abruptly into the quiet “Russian Hill,” an homage to Henry Mancini laced with strings and a flute.

How do you end such an album? With a circus tune, of course. “Brighter Day” was a slow, plodding song that sounds like it came straight from a calliope. You could almost hear children laughing and barkers peddling cotton candy. The song ended just as the album began: with a music box and the same note that started “Hush.” You had come full circle, but you felt as if you had been on the merry-go-round for 45 minutes, and it was about to start again.

And it tanked on the charts.

Jammed smack in the middle of Nirvana and Pearl Jam, Spilt Milk was a problem for Charisma Records, who didn’t really know what they had. Try pitching an album as varied and intense as Spilt Milk and see how far it gets you. The album got as high as No. 164 on the Hot 200 chart. Another lost album from a lost group, while Creed went double platinum. No one said the record business was fair.