The Unforgettable Fire – U2 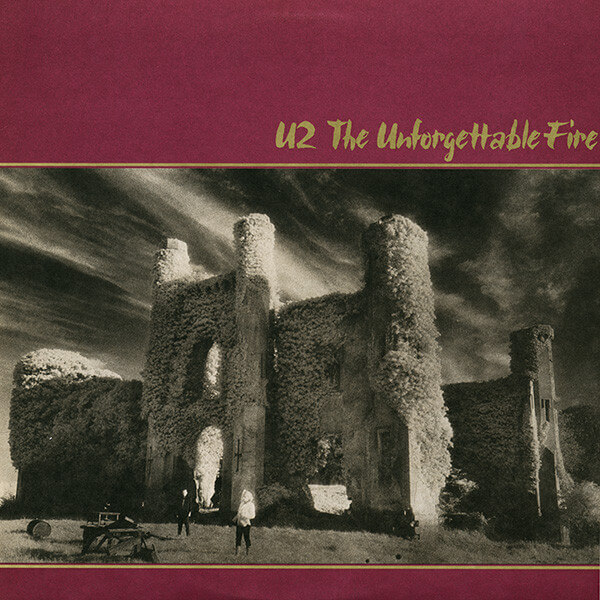 One night, as I was playing Nerf basketball in the living room with all the fervor of Michael Jordan, performing 360 dunks and shaking the entire house, I heard something different coming through the massive stereo cabinet my parents owned.

It was what is now known as the unmistakable sound of U2 – clanging guitars, tom-toms beating like an out-of-control heart, and a soaring voice above it all. The song was “Pride (In the Name of Love),” and it limped up the U.S. charts into the Top 40 only to stall at No. 33. There’s no accounting for taste.

It was at that moment that my teen years started to fade away.

I had heard of U2 through my Rock Yearbook that I got every Christmas, which focused mostly on music in the United Kingdom (and at that time, rightly so). I knew of War and the controversy surrounding some of their songs, but this was pre-Internet, and the only music I got was from the Atlanta and Greenville radio stations, which occasionally played the syndicated show “Future Hits,” a look at what was on the British charts each week (although “New Year’s Day” barely made it into the Top 10).

It was the beginning of a 35-year fascination with the group and a seven-year obsession. I got their fourth LP, The Unforgettable Fire, for Christmas in 1984 – about the time “Pride” peaked in the U.S. Top 40 – and finally understood what musical production was. Recorded at Slane Castle in Ireland, the album was a rich soundscape created by Brian Eno and Daniel Lanois. It’s an album full of four guys trying to find – or create – a new sound.

Before The Unforgettable Fire, the four Irishmen were seen as the deliverer of quasi-spiritual anthems designed as a call to action or in some cases, a call to war. With song titles such as “Surrender,” “Gloria,” “40” and “Sunday Bloody Sunday,” the band was Christian and militant, and unabashedly so – something a 16-year-old from north Georgia in search of meaning desperately needed.

In some ways, The Unforgettable Fire was more of the same; “Pride (In the Name of Love)” mentioned “one man betrayed with a kiss” while honoring the memory of Dr. Martin Luther King Jr., as did “MLK.” But the rest of the album was more like an experiment. And the production was sublime; you could almost hear the Edge striking each guitar string with his plectrum, as the sounds seemed to echo forever above a layer of strings and synthesizers. His trademark guitar playing, which many times in the past sounded like bagpipes, was more deliberate, more thoughtful.

Songs such as “Promenade” and “4th of July” were ambient portraits – the band playing with their instruments instead of playing songs on the instruments. But at times the experimentation and the group’s musical dynamic crossed paths to my wonder.

“The Unforgettable Fire” was emotional and at times, angry, relying on an art exhibition by victims of the bombings of Hiroshima and Nagasaki for its lyrics.

“A Sort of Homecoming” began with a booming, syncopated drumbeat followed by a rare bass solo from Adam Clayton, before lead singer Bono sang of hope and redemption: “And you know it’s time to go / Through the sleet and driving snow / Across the fields of mourning / Light in the distance.”

But the song that had me from first listen was “Bad.” Fueled by the Edge’s textural guitar patterns, with a single note (an E) chiming consistently throughout, it began quietly in the key of A, with the Edge playing a sustained chord before resolving it to the A. It then goes to a D with the E still in the chord and occasional rising an octave above, as if a bell were ringing.

The pattern is relatively simple and continues throughout most of the song, even the 12-minute versions that you get at the concerts, and it never gets old. It’s an ode to heroin, supposedly, but the lyrics seem more stream-of-consciousness than pointed, which is perhaps what a heroin addict would say: “True colors fly in blue and black / Bruised silken sky and burning flag / Colors crash, collide in bloodshot eyes.”

The song grows in intensity – at one point drummer Larry Mullen drops his brushes for a pair of sticks, and the change in tone is remarkable. Bono’s soft voice becomes a yell as he proclaims, “I’m wide awake / Wide awake / I’m not sleeping” before the mood drifts back to the Edge’s dreamlike chord progression. It’s sheer beauty that has only gotten better as U2 has performed it live.

My infatuation with U2 peaked with the release of The Joshua Tree three years later – another Desert Island Disc, for sure – and subsequently faded as they stumbled through a theatrical release (“Rattle and Hum”) and then unleashed Achtung, Baby, a 180-degree change in their sound and musical direction. They threw their sometimes too-serious personas to the wayside and embraced superstardom, turning into more of a techno band for their next three albums.

Bono wore sunglasses, sometimes wearing makeup and looking like a cocky mime. The Edge took to wearing bandanas around his balding pate and replaced his signature guitar playing with more of an industrial sound. And though I welcomed them back to the fold when they returned to their roots for All That You Can’t Leave Behind, I never forgave them for the disappointment. Yeah, I’m one of those fans.

Thirty-five years later, I discovered unreleased tracks from The Unforgettable Fire that deepened my love for those sessions. Tracks such as “Yoshino Blossom,” “Disappearing Act,” “Boomerang I” and “Bass Trap” filled out the context of what the band was going through during that time.

I made my own version of The Unforgettable Fire, adding wonderful B-sides such as “The Three Sunrises” and “Love Comes Tumbling.” The intent was not to improve on the album but to keep it going for a much longer period – similar to the double album of The Joshua Tree I created. For me, the more pre-Achtung Baby U2 I can get, the better.