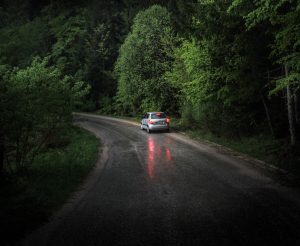 Photo by Valentin Salja on Unsplash

Nick Drake purists, the ones who knew him throughout his anonymity of the 1970s and 80s, howled in protest when Volkswagen put his “Pink Moon” in one of its commercials. Drake became an overnight success, 25 years after his death, and Drake was no longer music’s best-kept secret.

I was one of those who discovered Drake in the Volkswagen commercial, and I was drawn to his ghostly voice, simple arrangements and alternate guitar tunings. I grabbed everything I could from his catalog, and played it whenever I was down. Despite its morose sound (Drake died under suspicious circumstances from an overdose of antidepressants), most of his music was quiet, introspective and had an occasional flash of optimism.

Last night I was headed back to see my parents in north Georgia, playing a playlist of all my top-rated songs. I sang along to “Come Sail Away” by Styx, “While You See a Chance” by Steve Winwood, and “This Woman’s Work” by Kate Bush.

Nick Drake on my playlist

Then “Pink Moon” came on.

I suddenly felt like I was in the Volkswagen commercial, driving around to the song in the peaceful nighttime, my headlights trying to pierce the night on my way down the curvy mountain road. Nothing else mattered. It was just me, Nick Drake and the car.

I immediately switched to the Nick Drake playlist, and “Northern Sky” came on:

I never felt magic crazy as this
I never saw moons knew the meaning of the sea
I never held emotion in the palm of my hand
Or felt sweet breezes in the top of a tree
But now you’re here
Brighten my northern sky.

The piano, acoustic guitar and drums provided a moving accompaniment, graced by the sounds of a celesta. And as Drake sang in his plaintive voice, for the first time that I can remember in a long time, I genuinely smiled. And it felt good. It lasted only a moment, but it was one of those transcending moments where you feel as if you’re part of something bigger, something glorious.

The moment passed. But no matter what the Nick Drake purists say, My car, the mountain road and I will always have those three minutes and 46 seconds.