‘Somebody Made for Me’ – Emitt Rhodes 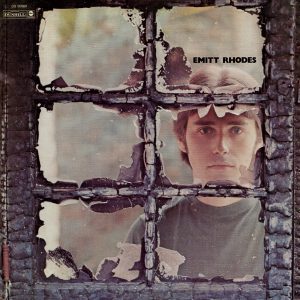 I can’t get Emmit Rhodes’ “Somebody Made for Me” out of my head. I can hear every nuance of his voice, every backup vocal, every piano note. It’s not driving me crazy yet — Because I love the song — but soon I’m afraid that I’ll become certifiably insane, crazy, loony, gaga, mad, out of my mind, deranged, demented, unhinged, my lid flipped.

I can’t sing the song to you to get rid of this earworm, so I must explain it to you as best as I can.

“Somebody Made for Me” starts innocently enough, with just a guitar playing a simple lick descending chromatically — you know, the way I like it. Then Rhodes’ voice comes out of nowhere, with piano and other backing instruments playing away, singing “Somewhere, someone special just for me…” and the instruments are still playing that descending chromatic scale.

That continues for a few times — repetition doesn’t help the act of beating it into my brain — until Rhodes climbs the scale, up to a G, I think, then jumps down an octave à la Paul McCartney. He does it again — repetition, dammit — then the background vocals proclaim in that descending chromatic pattern again, “Ask and you’ll receive.” And Rhodes answers, “Dear God in heaven, won’t you help me please?”

Dear God in heaven, won’t you help me please get this song out of my head? The song basically starts over, with essentially the same lyrics, same tune, same orchestration. There is a small bridge, but it’s so inconsequential it rarely enters my head. It’s just the same verses and chorus going through my head.

I adore this song and every 155 seconds of it. I want to play it now. I think I’ll play it on the way home. Twice. It’s that catchy, that good. It has elements of Paul McCartney at his Vaudevillian best; in fact, Rhodes’ voice sounds eerily like McCartney’s.

This doesn’t make me love it any more or less. It’s just that damn chromatic chord progression gets me every time. And these song lyrics are so simple that even I can remember them.

So what to do with an earworm? I’ve tried singing it to someone — singing a song to someone is supposed to get it out of your head — but it’s such an obscure song (from 1970) that I usually get a blank stare. Perhaps the transition doesn’t work if the other person has never heard the song.

If that’s the case, I’m in trouble in many ways. About 60% of my favorite songs have been heard by about 750 people worldwide.

I don’t know when “Somebody Made for Me” will get out of my head. It’s like the hiccups – you don’t know if you’ll ever get rid of them, and you see yourself on the evening news with the longest case of hiccups ever recorded. This song may break some earworm record, with me singing it for weeks, even months. I woke up with it in my head this morning. I see no end to it.

Replacing it. Now there’s an idea. I have a whole library of earworms that can replace it – Mike Viola’s “What to do with Michael,” Sam Phillips’ “What Do I Do,” McCartney’s “Live and Let Die” – those can invade my brain in seconds. Then I have a new problem on my hands.

It never ends. It’s the curse of someone who loves music. And I wouldn’t have it any other way.