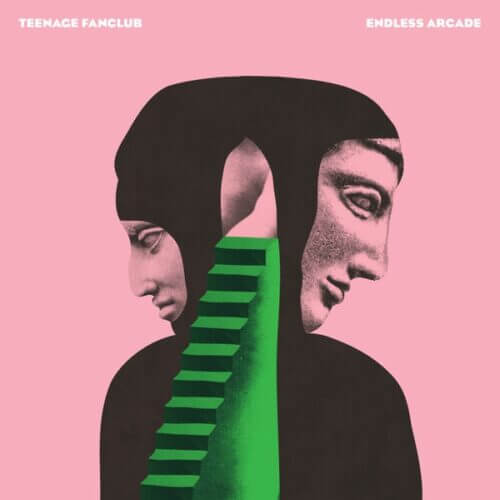 After the Beatles broke up in 1970, the four members spent most of their careers trying to prove that they could make it without the others. And despite some shining moments for each Beatle, they each failed on some level. The sum was greater than the parts.

I’ve compared Teenage Fanclub to the Beatles before, and recently, the band went through its own existential crisis when, after nine albums, bassist Gerard Love refused to tour and abruptly quit the band. Rather than completely fracture as the Fab Four did, Norman Blake and Raymond McGinley carried on without one of their major songwriters, replacing him on bass and taking on the songwriting responsibilities by themselves.

Endless Arcade is their first post-Love effort, and his absence on the record is noticeable and jarring. Love’s melodies and vocals gave the band complexity and variety, and now that the band has only two songwriting weapons at their disposal, they’re forced to use them a little too much. The result is uniformity and dullness.

“Home” and “I’m More Inclined,” both penned by Blake, could be the same song. “Home” is the opening track, and it goes on about three minutes too long thanks to an extended McGinley guitar solo. McGinley’s songs have always been more than adequate, and that’s all. As one half the writing duo, more than adequate isn’t good enough.

There are a few saving graces on Endless Arcade. Blake, who has often written heartfelt, poignant lyrics, has never been better, although the words reflect a personal crisis. “My world is upside down / I’m lost don’t know what to do,” he sings on “Living With You.” McGinley echoes the sentiment in the early single “Everything Is Falling Apart.” One wonders if it’s personal or band-related.

Blake and McGinley, now in their mid-50s, have come a long way since 1991’s masterful Bandwagonesque, which notoriously beat out Nirvana’s Nevermind for Spin‘s Album of the Year. They have mellowed over the years, as we all have, and growing old with Teenage Fanclub couldn’t be better. But 2016’s Here was just as mellow as Endless Arcade but had Love’s influence. After about eight or nine tracks, Endless Arcade seems—dare I say it?—boring.

But no matter how disappointing the album is, the band still has its moments. Take, for instance, “The Sun Won’t Shine on Me.” Blake gets personal again, confessing that “I have lost any sense of belonging / I am drifting like ice on the sea,” The song is arguably one of Teenage Fanclub’s finest moments in their 30-year history. The song begins with a high guitar arpeggio somewhat reminiscent of Radiohead’s “Nice Dream,” and Blake’s voice is almost a whisper as the song paces patiently in 6/8 time. The album builds then recedes until McGinley’s guitar takes over in a passionate solo. It’s those Byrds-esque moments that make me love this band, no matter who’s in it—or who’s missing.