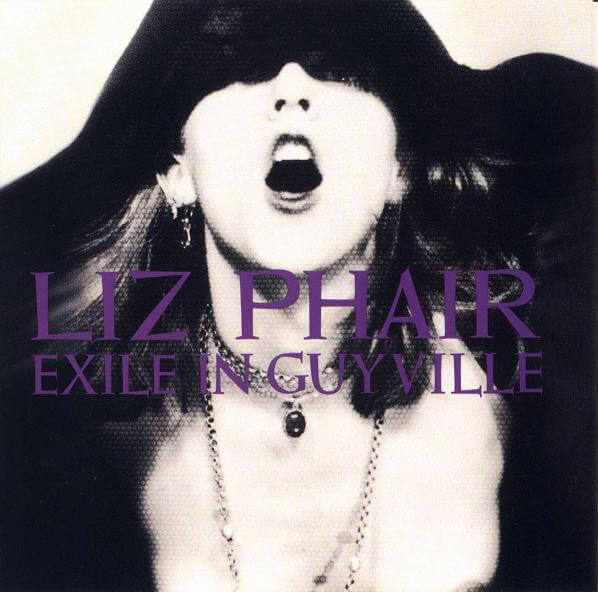 For decades, men have been able to do pretty much anything in rock music, from Bob Dylan’s less-than-stellar voice and looks to John Lennon’s use of the f word in “Working Class Hero.” Take your pick whether it’s worse to listen to Neil Young or look at him.

By comparison, women have had to be more demure, relying on pretty faces, curves, racy fashion and spectacular voices to succeed on the charts. It’s a terrible double standard, and while there are exceptions, it’s been the rule ever since the 1960s brought on the male singer-songwriter.

Enter Liz Phair, standing all of five feet two inches tall, with a foul mouth, a less-than-stellar voice and a renegade image. She wasn’t signed by Clive Davis at Arista Records because she didn’t look like Whitney Houston or sing like Celine Dion. Instead, she started from the bottom, broke and living in her parents’ house and recording songs on a four-track tape recorder in her bedroom.

The indie tape caught the attention of Matador Records, who signed her. The first record, Exile in Guyville, turned out to be a masterpiece full of unpredictable, truly independent sounds. It’s naughty and untamed, from the swearing on many tracks to the peek-a-boo nipple showing on the cover of the album.

An Answer to Exile on Main Street

Phair claims that Exile was a track-by-track response to the Rolling Stones’ Exile on Main Street. She told Spin magazine, “I made these crazy notes and charts. I took all of [Exile on Main St.‘s] songs and studied the arrangements, and I had these symbols, rudimentary symbols, like a swirly line or a wave would represent what I now understand as reverb or a chorus pedal. I would use them to map out my songs with symbols that represented the same thing — like this is a perfect response, or from a similar point of view.”

There are 18 songs on each album, and track for track you can tell there is a loosely based musical structure to each song. But with apologies to the Stones, Phair’s response is better and more innovative, with the lo-fi accompaniment ringing through, revealing intricate chord progressions in different time signatures.

Sometimes Phair is armed only with an electric guitar; other times an eerie piano is the only accompaniment. She tosses aside all traditional songwriting models; sometimes the songs have no chorus, and sometimes there’s just a chorus and nothing else. One song seems to have a coda attached to the end; another seems pieced together like a medley of sorts.

In all its musical quirkiness, Exile in Guyville is biting, from the smart jangling guitars that kick off the album to the wonderful train wreck that accompanies the end of the final cut, “Strange Loop.” As mentioned above, Phair does not have a great voice, but her flat, sometimes emotionless delivery, coupled with biting lyrics, packs more punch than any earnest-sounding singer could possess. “And the license said you had to stick around until I was dead / But if you’re tired of looking at my face, I guess I already am,” she sings in “Divorce Song.”

But it’s Phair’s ballads that express her true vulnerabilities. On the wistful “Explain It to Me,” she plays her guitar over a slow tom-tom; “Canary” features an echoing piano that plays while she sings with tongue firmly planted in cheek, “I come when called / I come, that’s all.”

With the lo-fi production — it sounds almost like Phair plugged in her guitar, pressed record on her tape player, and started playing — she is allowed to be honest, stripped bare of any artificiality. What’s left are raw emotions. “And whatever happened to a boyfriend / The kind of guy who tries to win you over?” she laments in the not-too-subtle “Fuck and Run.” And on “Shatter,” she sings, “Just being with you slapped me right in the face / Nearly broke me in two.”

Phair’s music is far from simple; her guitar playing is unique, finding chords where there shouldn’t be any and stringing them together for three-minute songs that fit the lyrics perfectly. On the previously mentioned “Shatter,” the guitar sings for a full two-and-a-half minutes before she begins singing. And on “Strange Loop,” the cacophony that builds at the end makes you lose sense of the cadence before Phair tones down the noise and her guitar finds the rhythm again, singing happily and giving us hope amid all the catharsis we’ve heard on previous songs. It’s a joyous moment.

Phair’s influence extends to Kim Gordon of Sonic Youth and groups like the Breeders and L7, and to a lesser extent, Alanis Morissette and Tori Amos. Phair eventually sought the mainstream, employing songwriters that had penned hits for such pop stars as Avril Lavigne, but Exile in Guyville is just as much a classic as the precursor was.