‘The King Is Half Undressed,’ Jellyfish 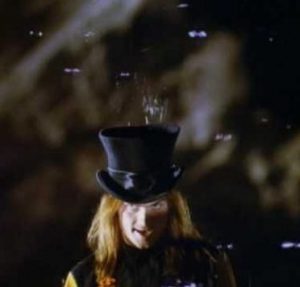 Favorite Song by my Favorite Band

If life were fair and people bought records because the songs were good, Jellyfish would have been the next Beatles. Instead, after two near-perfect albums, infighting broke out among the members, and history has all but forgotten them. (For a more detailed history of Jellyfish, see my Ode to Jellyfish articles.)

There are a few small hundred true believers, though, who still recognize the group’s talent and continue to wax poetic about the old days and look for any pale imitators that they can latch on to. The group is credited with launching a small power pop revival: groups such as the Merrymakers, the Nines, Mike Viola and the Tories can attribute their success to the Jellyfish mailing list.

But we still have those two albums. Two albums that remind us of pop perfection. My favorite song from this group, “Joining a Fanclub,” has previously been covered by this blog, so I will go with the best cut from their first album, Bellybutton. The song, called “The King is Half Undressed,” typifies what the band was and could do with music. Using rare chord progressions (augmented triads!), delicious harmonies and a totally unexpected bridge in which the harmonies take over and the key changes from a minor to a major. It’s like a separate movement to a musical suite.

The video – well, I can’t explain it. See for yourself. It’s offbeat, like the group, but it shows their innovation and leaves you with the feeling that you’ve experienced something special.

1 thought on “‘The King Is Half Undressed,’ Jellyfish”