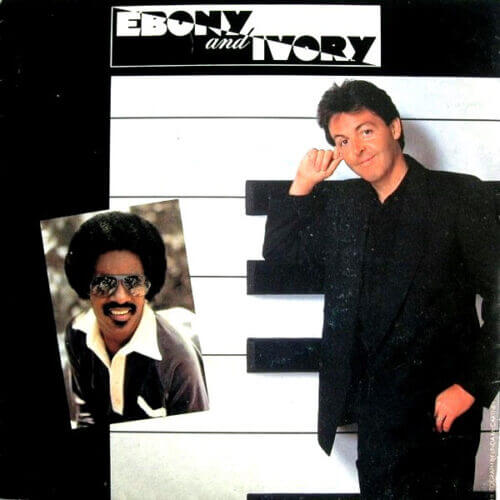 Many critics have lauded the last two decades of Paul McCartney’s career. Starting with 2005’s Chaos and Creation in the Backyard (and really, 1997’s Flaming Pie), the former Beatle has made us rethink his solo career and appreciate that a man can do what he does for 50 years. But it does beg the question: Why did his career need a jump start at the age of 55 or 60?

Some give examples: His silly singles such as “Spies Like Us,” “Say Say Say” and “Wonderful Christmastime”; his awful 1984 movie Give My Regards to Broad Street; and most of his career with his second band, Wings. But one really doesn’t need to look further than “Ebony and Ivory.”

What is there to like about this song? Could it be the soft-touch approach to racial harmony? That may be the only thing, and even that is so mundane, so boring, that it’s sanctimonious. “We all know that people are the same wherever you go”? / “There is good and bad in everyone”? And the symbolism of the piano knocks you over the head with a piano bench. The keys are black! And white! And they make beautiful music together!

Then there’s the rhyming. Paul, “ivory” does not rhyme with “harmony.” And “keyboard” with “Oh Lord”? That’s just wrong.

Then there’s the music. First, the tempo seems plodding; the song can’t decide whether it’s a ballad or a dance number. McCartney aims for the middle of the road — always a safe place for him, but as Mr. Miyagi said in The Karate Kid, “Walk on road, hm? Walk left side, safe. Walk right side, safe. Walk middle, sooner or later get squish! Just like grape.” The tempo is just — squishy. McCartney decided to add hand claps to try to force the tempo, but it reminds me of Steve Martin in The Jerk trying to clap to the rhythm. It just doesn’t work. 1970s-style synthesizers announce the song, which never is a good thing, and they continue throughout the song.

“Ebony and Ivory” was one of my favorites when it stood at the top of the Billboard charts for two months; but at age 13, I also liked Chicago, Styx and most other inoffensive white-bread artists. Looking back now, it really does represent McCartney near his creative nadir. And it marked the beginning of the end of Stevie Wonder’s reign on the pop charts.

And I’m not the only one to feel this way. In 2007, BBC 6 Music listeners voted it the worst duet in history. In 2009, Two years later, Blender magazine named it as the tenth worst song ever. What were worse offenders? To name but a few, Eddie Murphy’s “Party All The Time,” Vanilla Ice’s “Ice Ice Baby” and Billy Ray Cyrus’ “Achy Breaky Heart.” That’s some scary company.

I’m a huge Paul McCartney fan. I think he’s the greatest living songwriter. But this song represents all that was wrong with him after his stint with the Beatles — safe songs that probably took 30 minutes to write, featuring inane and trite lyrics. The man who gave us “Yesterday,” “Hey Jude” and “Let It Be” also gave us “Temporary Secretary” (Another bad rhyme), “The Girl is Mine” and “Ebony and Ivory.”