My First Brush with Music and the Internet 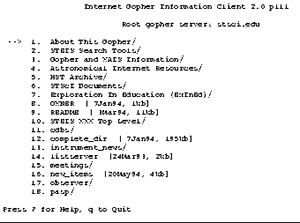 This is what the Internet used to look like, boys and girls.

I’m at my in-laws’ house today, where for some reason the DSL is acting like the old Hayes 2400 baud modem that I used to connect to AOL in the Dark Ages of the Internet. I first discovered teh Internets in 1994. Confused by all the hyperlinks that made up the World Wide Web (how can you find anything by clicking on a link?), I opted instead for now-outdated tools such as Gopher, WAIS and Archie.

Using the Internet back then was like finding one’s way in a dark closet; you had no idea what was out there, sometimes you hit a wall, and other times you’d bump into stuff that would lead you to something useful. In 1994, I was smack in the middle of my Innocence Mission obsession, and since the group wasn’t gracing the cover of Rolling Stone weekly, I needed more information about them.

I signed up for a Delphi account (anybody remember them?), which was totally text-based but seemed to offer the broadest range of services. (Even then, AOL, better known then as America Online, was looked down upon as a service for “newbies”.) I then began my quest.

It wasn’t easy. I ran into a lot of virtual brick walls; back then, Internet hosts weren’t always online, and I’d find something in a search result, only to be greeted with the 1994 equivalent of a 404 error. I learned basic Unix commands, sometimes having to learn a command to access an online Unix manual that would give me more commands. But one day, I hit the mother load: an archive of e-mails from a listserv completely dedicated to the Innocence Mission.

There were others like me. I was able to follow discussions, find similar fanatics, and learn more about the band. But best of all, I found lyrics to dozens of unreleased songs – songs that I had never heard, never knew existed. It was like discovering that a treasure existed, but not being able to get your hands on it.

No problem. With a handful of e-mail addresses harvested from the archives, I sent a few messages, joined the list, and got the list admin, then Keith Abbott, to send me cassettes of these unreleased songs that had been recorded at concerts. Most were audience recordings – muffled and garbled – but it didn’t matter. And there were a few radio recordings and demos of absolutely heavenly songs that rivaled most everything on their first two albums.

I then knew that the Internet was a powerful thing. Fourteen years later, I’m writing about music, watching my blog grow and reaching out to people worldwide. Today, I only wish my connection speed were better than it was back then.

1 thought on “My First Brush with Music and the Internet”