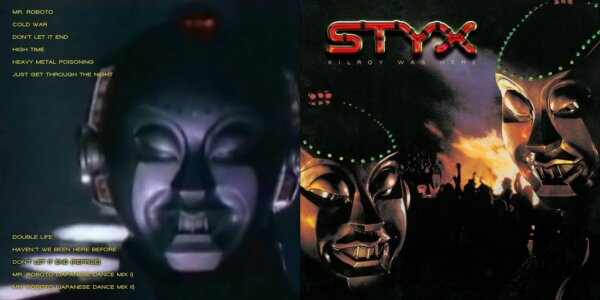 There. I said it. Not only did I like Styx, but I saw them in concert. And this was not during the heyday of The Grand Illusion and “Come Sail Away.” No, this was after 1983’s Kilroy was Here, the concept album about robots, censorship and rock ‘n’ roll.

Styx played at Murphy Center in Murfreesboro, Tenn. where my family was staying during the summer. I was 14 and still a disciple of Dennis DeYoung and Co., although having heard the first single from Kilory Was Here, “Mr. Roboto,” I was beginning to feel a little embarrassed for them. But I cajoled my mother into going.

My memories of the concert are fleeting:

Overall, my memory is of seeing my boyhood idols performing the songs I grew up with, and I sang every song with gusto. As my mom and I left Murphy Center that night, my ears rang from the loud music — something that I would get used to after the dozens of concerts I attended for the next 40 years. Styx settled into anonymity after Kilroy Was Here, only to revive with 1990’s Edge of the Century.

Later that decade, Young and Shaw eventually had enough of DeYoung and unceremoniously kicked him out of his own group. They now tour without DeYoung, with a substitute singer performing manically onstage with a charisma not unlike DeYoung. They’ve sunk to playing baseball stadiums and town festivals.

Styx’s music has been compared with a parking lot full of whale vomit, and they sit at the bottom of what critics refer to as the rubble that once was album-oriented rock music. Yes, their synthesizers sound more dated than disco. I don’t care. I’ll always have 1983. I still have the ticket stubs and the full-page ad that appeared in the Murfreesboro paper that summer. They are still a guilty pleasure, and I own their Greatest Hits CD. So does my mother.

Hey, it could be worse. I could like REO Speedwagon. That is worse, isn’t it?