Forcing Music on My Kids: An Experiment 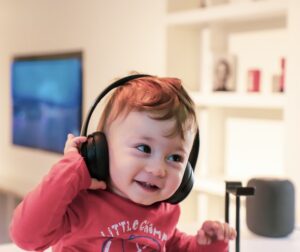 “So what’ll it be? Beatles? Queen? Billy Joel? Mike Viola?” I asked my kids as we began the two-hour drive to my parents’ house.

“Eh, I don’t care,” my 11-year-old daughter replied, absorbed in her game of Minecraft.

“You don’t care? Surely you feel like something. Are you in a happy mood? Something laid back and relaxing?”

I sighed as I launched a playlist of Mike Viola’s best music. I hoped one song would spark something in their musical minds and keep them humming all day. And 30 years from now, they would remember that song fondly.

I’ve always tried to influence my kids’ tastes in music. The first songs I played for them when they were born were the Beatles’ “For No One” and “Here, There and Everywhere” – two of the most beautiful songs ever recorded. Those were followed closely by Mozart’s Serenade No. 10 for Winds. I hoped that their small, still-developing brains would somehow be branded with perfect music, and would constantly shape their tastes in music throughout their lives.

For a while, my experiment worked. I created a playlist of lullabies for my daughter, and one night heard her singing them instead of sleeping (and that was perfectly okay with me). She once told me that one of the songs was so pretty it made her cry. I made another playlist of fun, poppy songs such as ABBA’s “Mamma Mia,” Toni Basil’s “Mickey” and Katrina and the Waves, “Walking on Sunshine.” My older daughter didn’t take to this one; instead, my younger daughter asked me to play it in the car every morning as we drove to day care.

Now that they’re older, they’re learning about groups I’ve barely heard of. They are familiar with fun. and Sara Bareilles. They sing “What Does the Fox Say” and “Let It Go” nonstop. And much to my chagrin, they like Katy Perry and Taylor Swift. But they abhor Justin Bieber, Miley Cyrus and One Direction. So I guess I have to take the bad with the good.

I’ve now begun throwing in useless trivia, wondering if something will stick. When Soft Cell’s “Tainted Love” came on the radio, I observed that the song was actually two different songs from the 1960s that the group mixed together, and “Where Did Our Love Go” was by the Supremes, who sang “Stop! In the Name of Love,” which she used to love to sing.

There was a bright spot the other day. My oldest had to create a soundtrack for a book report, and asked me to help her pick out the music. Needless to say, this was the greatest compliment I could get.

We looked at the requirements, I found some possibilities, and she chose the songs carefully based on how they sounded and whether the lyrics reflected what was happening in the book. The final product included Peter Gabriel (“Here Comes the Flood”), the Beatles (“You Never Give Me Your Money”), U2 (“Beautiful Day”), and Sara Bareilles (“Brave”). Yes, Katy Perry made it as well, but I’ll overlook that. Who cares? We had created a damn fine soundtrack together.

Ultimately, they will find their musical niche. I hope and pray that they find rap annoying, appreciate Queen and Nick Drake, and somehow embrace melodic music. Backed by their piano lessons and choir practice and fueled my annoying trivia and constant playing of music, they will have created a foundation for a lifetime of loving music – whether they want it or not.

Paul McCartney to the Rescue

I saw Paul McCartney perform several years ago at Piedmont Park, and afterward, I could finally say that I had seen a Beatle perform live. But I wanted to share that special moment with my daughters, so even though it was past their bedtime, I asked my mother-in-law to give the kids the phone so they could hear Paul sing “Hey Jude.” One daughter was 7, the other 4. They barely knew what “Hey Jude” was, but by God, they had heard the original Beatle hear it, no matter whether they would remember it.

With the ex-Beatle nearing 75, let’s face it; there are a limited number of times that he will go on any kind of nationwide tour. This could be the one and only time my daughters could see part of the legendary songwriting duo of Lennon and McCartney.

Now the girls are 11 and 9, respectively. The first songs I played for them when they were born were Beatles songs; they know most of the group’s popular songs, including solo songs such as “Live and Let Die,” “Dear Boy” and even some more recent songs as Paul’s “Queenie Eye” from his most recent album New. But when I approached them with the idea – father accompanying daughters to their first concert (and what a first concert it would be!), one said, “Eh, not really,” and the other said, “Shh, I’m reading.”

Yes, they’re young. Yes, they have their own tastes and interests. But this is a BEATLE. Ten, maybe 15 years from now when they read my post on why the Beatles are the greatest band ever, when they keep hearing their songs on the radio, they will know what a huge influence the band has been on popular music. And they could tell people that they saw one of them perform live.

Who knows? Maybe they will change their mind; maybe the little things that I’m doing – playing pop music for them whenever I can, playing Mozart documentaries on Netflix while they’re playing, making them watch “Footloose” – will eventually lead them toward an appreciation for music, and they’ll dance around when they hear Katrina and the Waves’ “Walking on Sunshine” or weep at the second movement of Beethoven’s “Pathetique” sonata.

Saying this opens me up to dozens of platitudes from friends and family, including the ever-popular “Growing up to be responsible, upstanding women is what’s important.” But I’m sharing part of myself, and one of the biggest influences on my life has been music. I grew up listening to my parents sing and play piano, play Jesus Christ Superstar over and over on the turntable, and heard my sister play Beatles albums, which eventually led to me going out and buying ELO and Queen records when I was 11. So far, neither has purchased an mp3.

Patience is key here. It might or might not happen; there’s still time. But Paul isn’t getting any younger.

3 thoughts on “Forcing Music on My Kids: An Experiment”