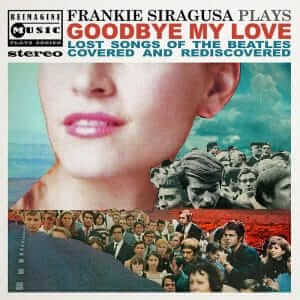 Get this: The Beatles hit Billboard‘s Hot 100 71 times as a group, had 34 Top 10 hits and 20 No. 1 hits. That’s an amazing output for a band that lasted only eight years — six, really, if you count only the time they were popular in the United States.

The Beatles had so many songs that they started giving them away to other people — friends such as Billy J. Kramer, Peter and Gordon, and Cilla Black. In all, they gave away about 30 songs to other artists, and 10 of those hit the Hot 100. Many have been forgotten, and most people aren’t even aware that John Lennon, Paul McCartney and George Harrison wrote these songs.

Enter artist/producer Frankie Siragusa, who has raised these songs from our feeble memories and shown us that even castoffs from the Beatles are good enough for an album. His new album, titled Frankie Siragusa Plays: Goodbye My Love – Lost Songs of The Beatles Covered and Rediscovered, is a mouthful but is a delightful romp through the songs that Lennon, McCartney and Harrison wrote for other artists.

Siragusa has almost created a concept album; he’s fantasized about what these particular songs may have sounded like if the Beatles had recorded them between Revolver and Sergeant Pepper’s Lonely Hearts Club Band (1966-1967). He’s carefully extracted 14 songs that work together thematically as an album, which begins surprisingly with McCartney’s brassy instrumental march, “Thingumybob.”

He’s put a lot of thought into what the group and producer George Martin would have done with them as opposed to what the other artists did with their recordings. You hear Harrison’s sharp guitar from the Revolver sessions, the crackle of Lennon’s voice on some songs, and Martin and McCartney’s pounding on the piano.

To complete the recreation, Siragusa needed some vocal help. He sang John’s songs, Keith Slettedahl from the 88 and Ray Davies Band sang Paul’s songs and Ken Stringfellow of the Posies sang the one George song. He even recruited Roger Joseph Manning Jr. (Jellyfish) to sing a fictional “Ringo” song culled from one of Lennon and McCartney’s works. Manning did a spot-on Starr impression when he and Andy Sturmer recorded some demos for the former Beatle, and he recreates it again on “I’ll Keep You Satisfied,” which, as Siragusa says, has “the perfect Ringo swagger.”

Even more care was made to recreate the songs, using only equipment that the Beatles had access to at the time, from guitars and basses to drums and microphones. He also played the part of engineer Geoff Emerick, placing the mics in the same places and using the same recording practices as he did. And like the Beatles’ recordings, he only used four tracks while mixing the album.

While the early Beatles tracks on the album such as “‘I’ll Be on My Way” and “Bad to Me” can’t escape the sound of the formula Lennon and McCartney used to manufacture songs early in their career (think “Misery” and “Ask Me Why”), Siragusa still manages to breathe some life into them. They sound like the Beatles brushed them off after keeping them stashed away for a few years and recorded them during their creative peak. But it’s when Siragusa addresses the songs that were written during the years that he’s trying to recreate that the compilation turns into something special.

“Woman,” written for Peter and Gordon in 1966, immediately sounds different than their earlier material, with a horn-led refrain. “Sour Milk Sea,” Harrison’s only contribution to the album, is a raucous, psychedelic romp that is reminiscent of Jackie Lomax’s version, and we finally get to hear what McCartney’s rough demo of Mary Hopkin’s “Goodbye” would have sounded like if the Beatles had recorded it.

“Penina,” originally recorded by Carlos Mendes, sounds like a different song — touching and compassionate, and it’s a perfect ending to a record that took a lot of thought, care and work. As an author who wrote a “What If” book about the Beatles, I welcome Siragusa’s concept. With Goodbye My Love, he’s created a new Beatles album full of new Beatles material. We haven’t heard that since “Free As a Bird” and “Real Love” in 1995.