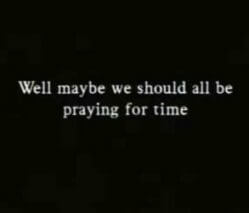 What makes a song a guilty pleasure?

Think about it. Think about a song that you really like, but would shrink in horror if anyone knew. Would your friends laugh at the fact that you cry to Bread’s “If,” dance to Rick Astley’s “Never Gonna Give You Up,” or belt out “Today!” every time you hear Neil Diamond’s “America”?

You love it, but because of some stereotype, bad video or some obscure law of pop culture, it is a Song Not To Be Liked. It’s like being caught in your driveway wearing bunny slippers.

I somehow feel a need to defend my guilty pleasures: “I like Air Supply…no, no, wait, don’t leave! Here’s why! I was young! It’s sentimental!” But when it comes to George Michael’s “Praying for Time,” I don’t care what people think. They can joke about “Wake Me Up Before You Go-Go” (which is pure pop genius), make jokes about restroom sex, and recall Michael’s obsession with his five o’clock shadow and his ass. Doesn’t matter.

‘Praying for Time’ – a change

“Praying for Time,” from Michael’s second solo album, was a departure from the pop fluff that got him famous. He wanted to get away from the Wham! image that had somewhat been perpetuated with his first album, Faith. This album was more reflective and somber, and “Praying for Time” laments the injustices of the world – hunger, hate – and wonders why we say, “I may have too much, but I’ll take my chances, ’cause God’s stopped keeping score.”

The music, slow, grand and apocalyptic, is subtle in its chord changes but features marvelous phrasing due to lingering strings and pounding drums. And Michael’s voice sounds inhuman, overproduced and full of echoes, as if he is singing from another dimension.

I will always feel a need to explain my DeBarge collection by claiming that it’s a reminder of the good ol’ days. But I still play “Praying for Time” without apology. Music that is beautiful needs no explanation.