‘Love Will Keep Us Together’ – The Captain and Tennille 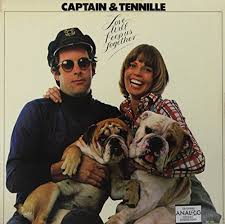 Everything about the Captain and Tennille screams ’70s, from the Daryl Dragon captain’s hat to Toni Tennille’s strapless tops and Breck Girl hairstyle.

They were also ridiculed: The term “Yacht Rock,” referring to the soft, soothing pop music of the late 70s and early 80s, was inspired partly by the “Captain.” (Christopher Cross’s “Sailing” also had a big part in it as well.) And “Muskrat Love?” A song about to rodents mating? Really?

All of that falls by the wayside when you hear “Love Will Keep Us Together.” The beginning is inauspicious: a piano playing a basic boogie-woogie line with a dated synthesizer bass. But when Tennille’s crisp, clear voice starts the verse, the accompaniment’s bass line begins to descend (I love that in a song) as Tennille sings “Love, love will keep us togethahh”. Some guitars thrash about in the next phrase to give it a slight rock feel, but you really know that this is just pure, yacht-rock pop (complete with Dragon’s captain’s hat).

Then something shifts. The E major chord slips down to E minor, creating some tension in the song, and then Tennille sings a string of quarter-note triplets (hear the words off the beat?) as she takes control of her man – and the song.

“Stop, ’cause I really love you,” she sings, as the chords move from a B flat to an augmented B flat, again creating tension because just one note moves away from the major chord that we’re so familiar with. This time the top of the chords inches up the scale, and then Tennille hits the quarter-note triplets again (“Look-in-my-heart and let LOVE”) before settling into the intro again.

There are some cringe-worthy moments: Dragon’s synthesizer solo during the bridge, and Tennille’s broken record “I will, I will, I will, I will….” But even then the final repeat works its way into a wonderful key change, and the duo knows just to leave it alone from then on.

I should note that neither the Captain nor Tennille wrote the song – it’s a Neil Sedaka song. His version sounds more like something from the girl groups of the 60s. But my friend Joel Kay, a music therapist, sides with the latter version. “The Captain & Tennille version just had so many hooks — the instantly recognizable rhythmic accompaniment, the quarter note triplets … Toni Tennille has great warmth and joy in her tone, and you never think for a second that she was seriously worried about somebody ‘young and beautiful’ stealing her man. Just truly infectious.”

And that’s why it’s a guilty pleasure and I will always defend loving it.