‘Shadows of the Night’ – Pat Benatar 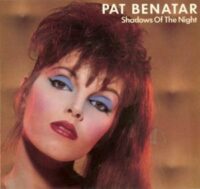 For some, “Shadows of the Night” is Pat Benatar selling out. In the early 1980s, Benatar was a rocker, plain and simple. Overlook her melodic hooks for a moment. She emerged from the 1970s as a sexually tough arena rock star, often getting lumped into AOR (Mom alert: Album-Oriented Rock) acts such as Foreigner, Journey and Heart.

But as can happen with most hard rockers, they tend to soften up a little to reach a wider audience (See Foreigner’s “I Want to Know What Love Is,” Journey‘s “Open Arms,” and Heart’s “Alone”). 1982’s Get Nervous featured more synthesizers and less hard rock, and even her look changed; she exchanged the trademark black mascara and spaghetti-strap blouses for a softer look with more demure clothing, lots of eye shadow and longer hair. But it would mark a new era of Benatar singles that would finally catapult her into Billboard’s Top 5.

The opening single, “Shadows of the Night,” didn’t make it quite that far, peaking only at number 13. Written by D.L. Byron, it was first a hit for Helen Schneider and then recorded by Rachael Sweet. Benatar changed some of the lyrics to the song, but it marked a departure from her earlier, edgy sound — an a cappella opening that featured two voices at first, then split into three at one point. It then exploded into a simple hard rock guitar chord that seemed to smolder forever, as the keyboards took over the melody.

Benatar’s voice was as sharp as ever, starting low, then crying out for more in the refrain as it blossomed into the a cappella chorus we heard at the beginning of the song, this time accompanied by a full hard rock band.

If you hate AOR music, then “Shadows of the Night” is not for you. Not that deep lyrically (And now the hands of time are standin’ still / Midnight angel, won’t you say you will), it’s formulaic middle-of-the road 80s rock. But the a cappella hooks had me from the beginning, along with the simple keyboard riffs that laced most of the record. And Benatar’s vocals – well, they’re so full of passion that it gives you goosebumps.

‘Shadows of the Night’ Video

One side note: The video was the first of two ridiculous videos that culminated in Benatar’s “Thriller”-like dance routine in “Love is a Battlefield.” This video featured Benatar as a Rosie-the-Riveter type, working in a World War II factory and dreaming of fame, shooting down German planes and booby-trapping Nazi headquarters. The shot of her in a P-51 Mustang, giving the thumbs up, and her bandmates/ comrades-in-arms in full fighter pilot regalia, mullets and all, is worth watching for comic relief.