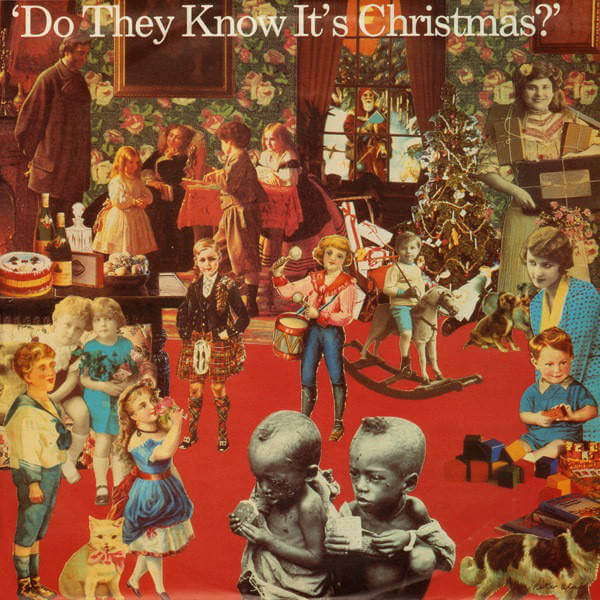 To be fair, “Do They Know It’s Christmas?” isn’t really a Christmas song, even though it’s played ad nauseam on pop stations during the holiday season. When I hear it, I don’t think of Christmas. I think of Band Aid, Bob Geldof, Midge Ure, and starving children in Africa.

The premise of the song, which was performed by England’s greatest superstars at the time, is that while we’re eating the fatted calf and having our figgy pudding for Christmas, there are children who have nothing to eat in Africa:

But say a prayer to pray for the other ones
At Christmas time
It’s hard, but when you’re having fun

Well tonight thank God it’s them instead of you

Wow. There goes all the fun for Christmas.

Who was in Band Aid?

Most of the top U.K. artists (and a few U.S. artists) jumped on board Band Aid:

And it worked. The Christmas song sold 11.9 million copies worldwide and helped spark Live Aid, a mega-concert whose proceeds went to Africa. The concert raised almost $200 million. And it all started with a simple tune that sounded nothing like a Christmas song.

Looking back, I never felt truly guilty listening to the song; instead, I became more aware of the famine in Ethiopia and felt empowered to do something about it. But the lyrics do raise a spark of guilt in you, and you feel obligated to give something (I bought the single – a drop in the bucket).

Of course, “Do They Know It’s Christmas?” was the impetus for the horrible “We Are the World,” which for some unknown reason outsold its former single. (So horrible, in fact, that it’s the song that makes me laugh in this series.) But it helped the kids in Africa, so not all of it is bad. I just wish more credit would be given to Mssrs. Geldof and Ure, the former having earned a knighthood for his actions. The two wrote a great song that does tug at your heartstrings — and your wallet.