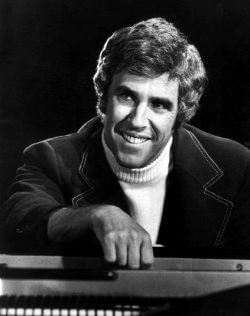 Burt Bacharach turned 80 yesterday. Most people under the age of 30 have no idea who he is, save for an appearance in a Geico commercial, alongside several pop culture icons such as Joan Rivers, Little Richard and that guy who does the voice-overs for movie trailers.

But Bacharach has been a trailblazer over the past 50 years, having started his career as part of the famous Brill Building crew of songwriters. He was the workhorse behind Dionne Warwick’s career. and has been the inspiration for numerous singer-songwriters today. According to Wikipedia, Bacharach has written 70 Top 40 hits in the United States, and 52 Top 40 hits in the UK.

In fact, a whole genre of music has emerged from his style – baroque pop, or chamber pop, which usually features a melodramatic arrangement highlighted often by horns and strings. Followers include the Left Banke (“Walk Away Renee”), Eric Matthews, the late Elliott Smith, the Pernice Brothers (the subject of yesterday’s Desert Island Discs) and the High Llamas.

Any Major Dude With Half a Heart has a mix CD available for download that is a perfect compilation of his career. If you’re familiar with his work, it’s a trip down memory lane. If all you know of him is his Geico commercial, go get a sample of one of Western music’s most revered composers.