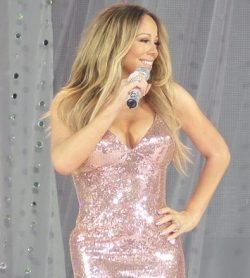 I could joke about how Mariah Carey is using Einstein’s famous equation to compare herself, but that’s too easy. Let’s go straight to her track-by-track analysis that she gave to MTV this week.

Basically, that song is about migrating from one place to another, whether it’s from the bar to the club, from the club to the apartment, to wherever, whatever, city to the beach, beach to who knows where.

So a song called “Migrate” is about…migration. Never mind that “migration” usually refers to a seasonal move from one place of residence to another.

The aforementioned “Touch My Body”: “…it’s a song that I love so much, a song that really does express my personality.” Uh, yeah.

“Cruise Control”: “What it really means is that you have to slow down.” I’m glad she took that to the next level.

“Side Effects”: “I wrote it because it was necessary for me to write it.”

And that’s just the first four songs! What depth! What meaning!

What a far cry from “Vision of Love.”