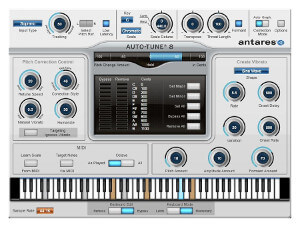 In last week’s post describing the suckiness of Lil’ Wayne’s “Lollipop,” I mentioned his judicious use of a device called Auto-Tune, a processor that automatically corrects any variations in pitch.

It has been dubbed “The Cher Effect” because of its introduction in her 1998 hit single “Believe.” Since then, dozens of artists have copied the technique, and a list has been circulating around the Interwebs that points out the Top 10 offenders.

I’m not against using audio techniques to enhance or add flavor to a song; reverb, double-tracking, equalization and various other filters can be wonderful effects. And artists such as Herbie Hancock and Neil Young have manipulated their voices with vocoders, which sound similar to the Auto-Tune and make one’s voice sound computerized. (Neil Young’s Trans is difficult to listen to as a result.)

But according to The New Yorker’s Sasha Frere-Jones, this makes correcting an off-key voice okay, likening it to putting makeup on a woman:

Whether the engineer merely tweaks a few bum notes or makes a singer tootle like Robby the Robot, recorded music is still a composite of sounds that may or may not have happened in real time. An effect is always achieved, and not necessarily the one intended. Aren’t some of the most entertaining and fruitful sounds in pop—distortion, whammy bars, scratching—the result of glorious abuse of the tools? At this late date, it’s hard to see how the invisible use of tools could imply an inauthentic product, as if a layer of manipulation were standing between the audience and an unsullied object.

Uh-uh. Makeup is used to enhance or bring out the natural beauty of a person. Auto-tune is a prosthetic, or as L.A. Weekly music editor Randall Roberts so aptly summarized, “like fake boobs: once you realize they are fake, it kind of diminishes the joy of seeing them.” It’s a result of lazy singers who either don’t have the talent or don’t have the discipline to hit a note correctly. Wrong note? Let’s not do it over. Let’s scrub it, fix it, make the singer something he or she isn’t. Alt-country singer Neko Case told Pitchfork magazine, “It’s not an effect like people try to say, it’s for people like Shania Twain who can’t sing. Yet there they are, all over the radio, jizzing saccharine all over you. It’s a horrible sound and it’s like, ‘Shania, spend an extra hour in the studio and you’ll hit the note and it’ll sound fine. Just work on it, it’s not like making a burger!'”

The danger is the overuse of this technique, which may threaten a certain humanness created when singing just off the note. From Billie Holliday to Patsy Cline, artists have used vocal techniques to slide into notes, and we can feel the pain, yearning or suggestiveness in each lilt. Sometimes musicians create dissonance just to make chord modulation that much more pleasant – i.e., when the note is corrected. With the Auto-Tune, we effectively dehumanize the music. Says music critic Robert Everett-Green:

Sarah Vaughan had a famously good ear, yet she purposely sang away from the centre of the pitch when the music seemed to need it. “You’ll dry all my tears,” she sings in Lover Man, her voice bobbing below pitch between each of the first words before landing deliberately flat on “tears.” She’s back in tune by the very end of the phrase, but along the way she has given the line a sexy, needy fluidity that suits the song’s dreamy construction of the perfect lover.