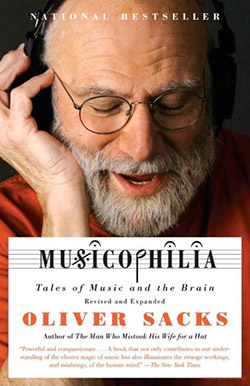 We’ve all had it happen: One song finds its way into your brain, and try as you might, you can’t make it go away. Oliver Sacks calls the tunes “earworms,” and they have been known to stick in people’s minds continuously for weeks at a time before finally dying out.

They can be maddening. I can still remember several earworms dating back to my childhood:

Even Neil Diamond is susceptible, according to the San Francisco Chronicle. “If I wasn’t in the business of songwriting, I’d probably be seeing a doctor,” he said. “I’ve tried everything from cold showers to listening to other people’s music, but nothing helps.”

Many times, just a snippet of a song will get stuck in my head, and it closes itself into a loop, trying to find a way out. Frustrated, I sometimes have to play the whole song in my head to show the earworm how to get out of the loop. (It reminds me of a “M*A*S*H*” episode in which Father Mulcahy is playing a song on the piano. When someone asks him what it is, he says, “I’m not sure, but whatever it is I can’t seem to find the end. I’ve been playing the same thing for 20 minutes.”)

The same thing happened to Mozart. When he was a child, his kids would drive him crazy by playing songs on the piano and then stopping them. His brain would force him to go downstairs and complete the song because his ears couldn’t resolve what his brain was hearing.

Sacks attributes this phenomenon, which counts even Mark Twain as a victim, to two causes:

Dr. James Kellaris of the University of Cincinnati has an even more intriguing theory: Certain properties of music may be like histamines, which cause an itch on the skin. Exposure to such music may cause a sort of “cognitive itch” in one’s mind. “The only way to scratch a cognitive itch is to repeat the offending music mentally,” according to his website. “But this only exacerbates the itch, trapping the hapless victim in an involuntary cycle of repeated itching and scratching.”

Researchers at Dartmouth University used magnetic resonance imaging to study people’s brains after listening to music and discovered that when we listen to a catchy song with parts missing, our brain will continue to work and try to fill in the missing pieces.

For some unknown reason, certain songs excite that part of the brain, forcing it to play it over and over like pressing rewind and play again. Scientists call this a “phonological loop,” and it’s sometimes impossible to break. And playing it over only makes things worse, imprinting it in our auditory cortex for longer. It’s a vicious cycle.

Which Songs are Earworms?

What particular songs induce earworms? It’s not known,, but certain songs have something that excites each individual’s auditory cortex. Some people point to “Macarena” as an earworm, but it does nothing for me. I’m sure most people would not be affected by “Wild Irish Rose.” But it’s the same concept as to why some of us are attracted to songs with a minor key, and some of us love augmented and diminished chords in songs. Our tastes are different because our brains are reacting differently to songs.

I think there’s also a heightened tendency among music lovers to have earworms. We tend to listen to more music and probably process it more than most, noting patterns, phrases and chord progressions, and it sticks with us. I think I have tunes going through my head most of the day, but most of the time they are too unobtrusive for me to even notice. If I stop and try to figure out what it is, it will go away, only to be replaced a few minutes later.

The Cure for Earworms

What helps? One respondent to Kellaris’ survey argued against trying to fight it — “It only makes it angrier!” But Kellaris found that nearly two-thirds of sufferers try to use another tune to dislodge the one that’s stuck. Others try to distract themselves, and some try to share the earworm with others in the hopes that it will pass from their head to another’s.

Somehow, though, I don’t think it’s a good idea to go up to someone and start singing “The Freaks Come Out At Night.”

4 thoughts on “Earworms and Music”