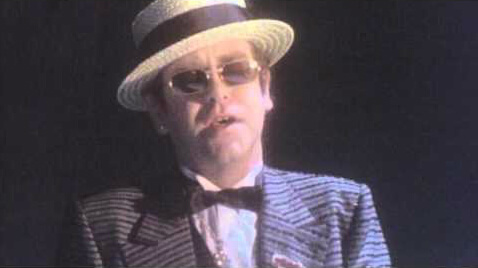 A few days ago, Elton John’s “I Guess That’s Why They Call It the Blues” found its way into the rotation on my iPhone, and I relished in the perfection of that song. It’s one of the last truly classic Elton John songs; several years later, he retreated into adult contemporary oblivion with such light filler as “Sacrifice” and “Can You Feel the Love Tonight.”

The song, from John’s 1984 album Too Low for Zero, has a throwback 1950s sound, led by Elton’s bluesy (no pun intended) piano playing and Stevie Wonder’s harmonica solo. There are lots of seventh chords in the song, which add to the old sound.

Bernie Taupin’s lyrics have never been better. They are spot on and earnest, with gems such as “Wait on me girl; cry in the night if it helps/But more than ever, I simply love you more than I love life itself.” They’re heartfelt, wistful and simple, getting right to the point.

The lyrics were apparently written about Taupin’s then-wife, Toni Russo. “Basically, it’s a letter home with a small tip included about making the most of time, not wishing it away just because you can’t be with the one you love,” he said. Indeed, John advises us in the song to “live for each second without hesitation.”

But what Sir Elton does so well on “I Guess That’s Why They Call It the Blues” — and throughout his career he has done this — is create a paradox in the music. Even though the song is in a medium tempo and a major key, there’s an overall wistful feeling that at times tugs hard at your heart. The nostalgic sound further adds to the confusion, creating contentment while planting the seeds of longing and remembrance.

For once, the buying public agreed with me. The single went platinum and went all the way to No. 4 in the U.S.

Below is the original video for the song; like many 1980s videos, it tells a story within the lyrics — that of a soldier and his girlfriend who are separated while he is at boot camp. My friends and I groaned in disappointment when the girl seemingly gives in to temptation, juxtaposed against the boy, lying down in frustration and depression in the pouring rain at camp. It’s a perfect complement to the poignant song. And after hearing it, you’ll know why AllMusic crowed, “‘I Guess That’s Why They Call It the Blues’ is likely to stand the test of time as a standard.”