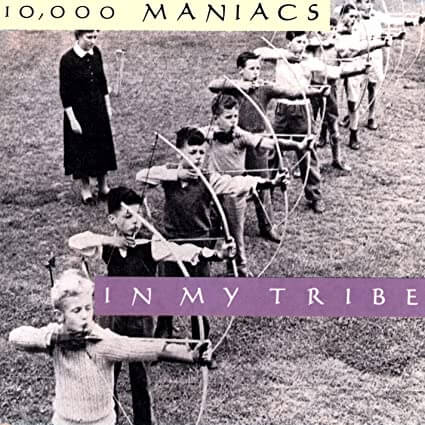 By 1987 I had begun branching out and taking some risks in my musical tastes. I was in college — that’s what you’re supposed to do. Some experiments didn’t work out — I still kick myself for having wasted money on X’s See How We Are and Concrete Blonde’s self-titled debut. But when Jeff Whatley introduced me to 10,000 Maniacs’ In My Tribe, I realized that taking chances sometimes yielded pleasant rewards.

I wasn’t sure at first. The band’s name instantly conjured up — um, well, 10,000 maniacs screaming their heads off and slam dancing and causing bodily harm to many people. You have to realize that I was fresh off of an 80s Top 40 kick that had most recently included Prince’s “Kiss,” Van Halen’s 5150 and Boston’s Third Stage. I wasn’t exactly up to taking risks just yet.

However, the music suggested that I should take a closer listen. With easygoing, mid-tempo songs featuring jangling guitars and organs, the band sounded straight out of the 1960s. R.E.M. lead singer Michael Stipe even sang on one of the songs. Living two hours away from R.E.M.’s hometown of Athens, Ga., and having just gotten acquainted with their back catalogue, I had quickly become a fan. Stipe’s appearance gave 10,000 Maniacs instant credibility in my book.

I soon learned that lead singer Natalie Merchant was the heart and soul of the group. Her distinct voice and enunciation (“I draw a jackal-headed womahn een the sahnd”) made you wonder what country she was from (Jamestown, N.Y., by the way). Her lyrics — like the above example — were sometimes enigmatic, but others are almost too blunt:

But no matter what Natalie Merchant sang, it always came out beautiful on this record. The lyrics sheet read like a letter to a lover:

“I wanted to be there by May at the latest time. Isn’t that the plan we had or have you changed your mind? I haven’t read a word from you since Phoenix or Tucson. April is over; will you tell me how long before I can be there?” (from “The Painted Desert”)

But when Merchant sang the prose, phrasing in her unique way, it became poetry. Such lyrics were so earnest and direct, but appearing at the end of the song, it became heartfelt and achingly real.

Natalie kept singing, every song adding to the mystique that this album now holds. Only a few tracks were below par: “My Sister Rose” sounded like a polka, which is okay if you like polkas, but it seemed a bit out of place on this record.

The standout track was “Hey Jack Kerouac,” a tribute to the beatnik writer that had a timeless melody. With guitarist Robert Buck (no relation to R.E.M.’s Peter Buck) clanging the accompaniment, you could sense that Merchant was smiling when she was singing this, and it made the song even more charming.

In My Tribe: Lightning in a Bottle

People recognized the genius of In My Tribe; although none of the singles hit the Top 40, the album went to No. 37 on Billboard‘s Top 200 album chart.

I thought I had found a new group to identify with. Sadly, their follow-up, Blind Man’s Zoo, was a pale copy of In My Tribe. Their earlier releases and demos were disjointed and contained little melody. The band reemerged in 1992 with the popular Our Time in Eden, but Merchant’s once-unique voice sounded trite and uninspired. She left the group a year later for a solo career, and I never latched on to her subsequent albums.

In My Tribe, then, remains an anomaly for a group that promised much and delivered little. I listen to it, marveling at its perfection, but wishing for more, and happy that I took a chance.