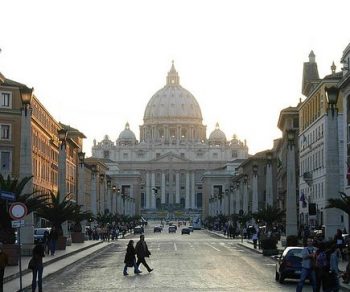 (Hat tip: Susie B.) Recently the Vatican’s official newspaper, L’ Osservatore Romano, published its list of the Vatican Top 10 albums. We’re not really sure what the context here is, although the translated article does mention something about a desert island. Maybe it’s Top 10 albums you should hear to get to heaven, or Top 10 albums that don’t make fun of the Pope. It’s just, um, 10 albums that they thought they should single out for one reason or another.

The top 10 (in chronological order):

Now, I won’t squabble over whether these are the best albums ever, though some are puzzling. The authors attempt to wax poetic on the merits of each album and hit the obvious points: Dark Side of the Moon was a masterpiece in production, Graceland introduced us to world music. But you still wonder: Why these? Why do these get the Vatican okie-dokie? Doesn’t Thriller mention the undead and paternity disputes with Billie Jean? Wouldn’t the spiritual nature of The Joshua Tree trump the egotistical, worldly Achtung, Baby? And wouldn’t any Oasis album be blacklisted because the Gallagher brothers are such asses?

It’s clear the Vatican is trying very hard to be relevant in this day and age, but I keep asking myself the same question: So what? You could almost draw these selections out of a hat. And how do musical/cultural icons landmarks like Graceland and Revolver really compare to solid 70s albums like Rumors? They could have dragged this out a bit more, choosing different categories or weaving some common thread among the choices.

Of course, they run the list of jinxing all these albums with their seal of approval; I mean, will Dark Side of the Moon ever sound the same now that we know Benedict XVI thinks it’s cool?