The Joshua Tree – U2 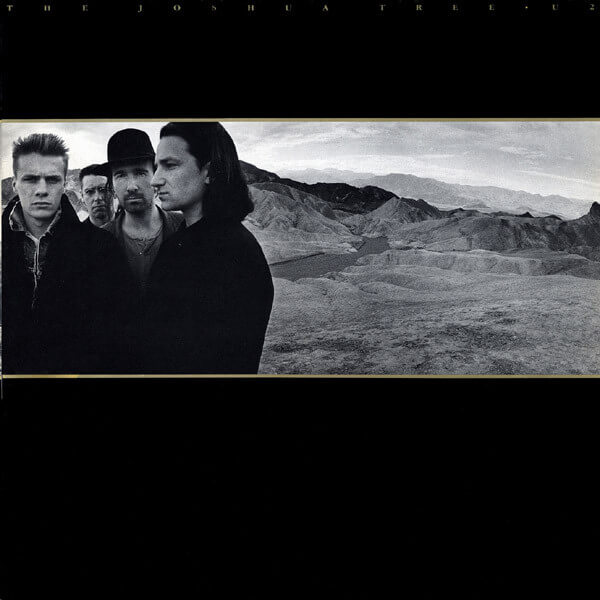 March 1987. I was on a choir tour during spring break, and I knew U2’s The Joshua Tree would be released while I was on tour. But I had to have it — the day it was released — no matter what.

So I begged and pleaded with the charter bus driver to stop at a local mall on March 9 in Macon, Ga., so I could go buy the cassette. He relented, I bought the cassette, and thus began a 30-year love affair with one of my all-time favorite albums.

I was already a big fan of U2; I had gotten their previous release, The Unforgettable Fire, for Christmas one year, and I quickly followed that up by buying the live album Under a Blood Red Sky – at Six Flags, of all places. The rest of the world was discovering the band as well, and they just happened to be peaking artistically as their popularity was exploding. It was a perfect storm, and it catapulted U2 into superstardom.

The first song I heard from The Joshua Tree was the massive hit “With or Without You.” Starting quietly with just drums and a simple two-note keyboard melody that continues throughout, the song builds in intensity as Bono’s voice starts low and soft and grows higher and louder. More instruments are added, including The Edge’s signature jangling guitar, which is almost atmospheric. The song peaks about two-thirds of the way through the song, with pounding drums and Bono’s wailing, “I can’t live with or without you.” The song then goes back to its quiet motif with the two-note melody, drums a little more pronounced, and Edge’s guitar providing the main phrasing.

When the bus driver stuck the cassette into the cassette player, I was enthralled. “Where the Streets Have No Name” started the album off — a fast-paced anthem accentuated by Larry Mullen Jr.’s drums. “I want to run, I want to hide, I want to tear down the walls that hold me inside,” Bono sang. It was quintessential U2.

The other monster hit on The Joshua Tree, “I Still Haven’t Found What I’m Looking For,” is perhaps a little too simplistic for my tastes, but it’s still what U2 was all about — a hint of religion sprinkled with doubt. Its sound is a prelude to the focus on American roots music that comes later in the album.

I may get flamed for this, but my least favorite song on the album is the explosive rocker “Bullet the Blue Sky.” It’s based only on one chord, and I like chord progressions. One chord doesn’t progress anywhere, and neither does the song. The only saving grace is The Edge making incredible noises on his guitar.

We get a piece of Americana at the beginning of “Running to Stand Still” – a restless blues guitar solo that eventually settles down into keyboards as Bono sings about a woman struggling with drug addiction. It’s a relatively quiet number that was the perfect ending to Side 1.

Side 2 begins with “Red Hill Mining Town,” which is generally overlooked on this album, but it’s one of Bono’s better melodies. Then it’s back to old U2 with “In God’s Country,” with The Edge playing his trademark chiming guitar sound throughout the song. It’s followed by a tribute to blues/country, “Trip Through Your Wires,” my second least favorite song on the album.

I see the last three songs on the album as almost a medley, or at least a curtain call. “One Tree Hill,” a tribute to assistant Greg Carroll, who had died in a motorcycle accident in 1986, has haunting strings and another memorable riff by the Edge. “Exit” is angry, lost and out of control; it’s mostly a musical number that builds in intensity before quieting down, only to emerge with a vengeance. Finally, “Mothers of the Disappeared” is an odd coda with an easy-to-remember melody.

There are so many themes to The Joshua Tree: the group’s fascination with America, their continuing dalliance with Christianity, the crisis in Central America, the desert — one can delve into the lyrics and find many clues to these themes. Of course, this didn’t help critics’ complaints that the group was taking itself too seriously, but as a 19-year-old grappling with politics and religion, it all seemed right to me.

I still listen to it. I’ve made my own version, substituting B-sides for “Bullet the Blue Sky” and “Trip Through Your Wires.” I even made a double album — Bono had originally envisioned the album’s title as The Two Americas and wanted to make it a double album. As it stands, The Joshua Tree is still close to legendary; it topped the charts worldwide, sold 25 million copies, and stands near the top of many greatest album lists (40th on critics’ lists, according to Acclaimed Music, 59th according to The Guardian and 11th according to Hot Press).

Later, U2 would take their infatuation with America — and their ego — a bit too far with an album and movie, then take a 180-degree turn with the European-influenced Achtung, Baby. And that was the beginning of the end of my hero worship.

But I’ll always have The Joshua Tree.