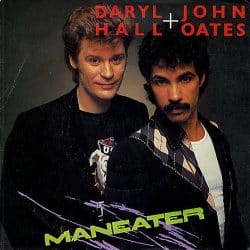 So Daryl Hall and John Oates made it into the not-so-exclusive Rock n Roll Hall of Fame this year – the same year as KISS, Nirvana, Cat Stevens and Linda Ronstadt, and leading some to wonder what the organization’s definition of rock really was.

Let’s make one thing clear: I was thrilled by their induction – I don’t tell too many people, but I am a fan. Yes, they’re dated – who can forget Hall’s Aqua Net-styled mullet and Miami Vice blazers, Oates’ giant porn star mustache and seemingly Jheri-curled mullet? Who can forget Hall preening in front of the camera on the videos while Oates constantly tried to peek around Hall? They’ve been ridiculed by Beavis and Butthead (“Hey Beavis…Are you a maneater?”). They’ve been parodied on Saturday Night Live and an online TV show called “Yacht Rock,” which poked fun at early 1980s soft rock artists. Mentioning Hall & Oates in the same breath as Toto and Christopher Cross? Really?

They’re an easy target. Anything that looks and sounds completely dated reminds us of when we temporarily lost our minds and tastes – think the Village People, Rick Astley, Backstreet Boys; leg warmers, parachute pants and Members Only jackets. It’s easy to make fun of anything in retrospect. But despite their tie with 80s culture, Hall & Oates put together a string of successful hits during the early 80s that rivaled Madonna, Springsteen and Michael Jackson. They were a hit factory at the turn of the decade, only to jump a Maneating shark in 1982 and stumble through the rest of the 80s, ending the decade irrelevant and forgotten.

The duo began their career in the 1970s with a blue-eyed soul sound; “Sara Smile” and “She’s Gone” sound like lost Motown classics. But then “Rich Girl” added a memorable pop hook to the formula, and the duo had found their sound. (One can argue that this was their creative peak, but more was to follow.) And oh, how that formula worked. “You Make my Dreams Come True” and “Kiss on My List” made the top 5, and they followed that success with Private Eyes, an album which yielded two #1 hits – the title cut and the genre-crossing “I Can’t Go for That (No Can Do),” which topped the R&B charts as well. Apparently, Michael Jackson tweaked the bass line of the song into his smash hit “Billie Jean.” It seemed that everything they released turned to gold; they could do no wrong.

And that’s usually when disaster strikes.

I don’t know where to start with “Maneater.” It begins innocently enough, in a minor key with a descending bass line, similar to “All Along the Watchtower,” only a bit more plodding. The instrumental intro lasts 45 seconds, seemingly made longer with a saxophone playing the soon-to-be all-too-familiar melody.

Hall switches to a major key for the verses, then goes back to the minor key for the chorus. Then it repeats, and halfway through the song you’re already glancing out the window for some idle stimulation. The “bridge” is just the chorus, just without Hall’s voice. It’s yet another neverending instrumental, with the saxophone playing one note, then two notes, then three notes… (I hope he wasn’t getting paid by the note?)  By the time Hall jumps into the chorus — again — you’re ready to jump in the bathtub with the radio plugged in. 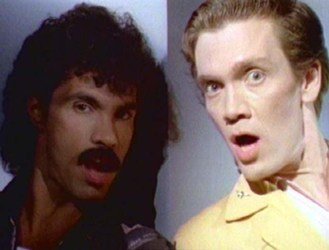 The video ranks up there with Billy Squier’s “Rock Me Tonite” as one of the most unispiring videos from the 1980s. The duo was known for not really putting a lot of thought into their videos; as a result, they all look the same. (I think in “Private Eyes” the band sported fedoras and sunglasses.) This video was more of the same:  focus on Hall, who is singing and playing a keyboard; Oates is relegated to band member status, looking suspiciously around a corner with the rest of the session musicians, warning us, “Ohh here she comes!” (Yes, that’s G.E. Smith, the former Saturday Night Live bandleader, with him). Add a black panther — because, hell, why not? Who cares if the song mentions a jaguar instead? —  and you have a vintage bad 80s video to a vintage bad 80s song.

Despite this, “Maneater” was yet another No. 1 hit for Hall & Oates. But it dulled some of the luster from their shiny pop perfection. Their subsequent releases were the epitomy of one step forward, two steps back: The quiet, sexy “One on One” followed by the manic cover of Mike Oldfield’s “Family Man”; the retro pop of “Say It Isn’t So” marred by the next single, “Adult Education” – a song in which they felt compelled to explain that you could say the word “Adult” two different ways (“A-dult! a-DULT!”); the bland “Out of Touch” sounding more like a classic compared to “Method of Modern Love,” in which they felt compelled to s-p-e-l-l out the title for us.

Their last Top 10 hit was 1988’s “Everything Your Heart Desires.” They went out with a good one. But three years later, Nirvana appeared and blue-eyed pop now rivaled disco and new wave as the most outdated genre in rock n roll.

Watch out boys, she’ll chew you up! Fame’s a Maneater!