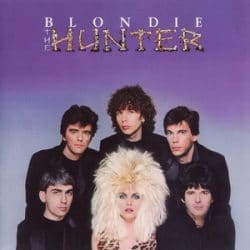 In the late 1970s, Blondie was the “it” band. They could do no wrong, releasing seven Top 40 hits and four No. 1 singles in the span of two short years. Their hits ranged from power pop and disco to reggae and even rap, even though they started as a punk band in 1974.

After their huge success, the band took a break in 1981. Several members had side projects, including lead singer Debbie Harry, who released her own solo album.

Amid legal squabbles, the band reunited in late 1981 to work on their next album, which was titled The Hunter. When it was released, there were warning signs:

The result was a hot mess, filled with retreads of their famous hits. “Little Caesar” was a reggae remake of “The Tide Is High,” “The Beast” had some rapping like “Rapture,” and “War Child,” was a retread of “Call Me.” They had auditioned a song for the James Bond film For Your Eyes Only, but it was snubbed—and rightly so—for the Sheena Easton entry, which went into the Top 5. They threw it on this album.

The album sounded like a band that was out of ideas—and out of patience. Producer Mike Chapman said, “I knew that we were in a different and far less accessible artistic space. And that worried me. I could tell that things were different now, and I knew that this would be the last Blondie album.”

He was right—for a while. The Hunter, released in 1982, reached only No. 33 on the album chart. The single, “Island of Lost Souls, barely cracked the Top 40 at No. 37. Months later, the band broke up amid lawsuits, illness and commercial decline. They would reunite in 1999, but The Hunter caused the damage back in 1981.