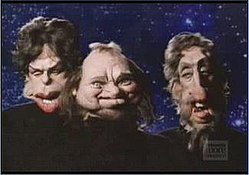 The drummer for Genesis took over for lead singer Peter Gabriel in 1975, and over the next five years, the prog-rock band evolved from its theatrical, heavy-handed rock into more of a classic rock sound. “Follow You, Follow Me,” “Misunderstanding” and “No Reply At All” were melodic masterpieces, and the group’s popularity began to grow.

So did Phil Collins’ popularity. 1981’s “In the Air Tonight” is a rock classic, and 1983’s “I Don’t Care Anymore” was a better, angrier clone of it. But that same year, he covered the Supremes’ “You Can’t Hurry Love” in a decidedly pop vein. Likewise, that same year saw Genesis’ self-titled album begin to migrate in the same direction. Their top 10 hit “That’s All” was a light, medium pop ditty that was a far cry from their earlier sound.

It began with Collins’ 1985 album No Jacket Required. Let’s face it: “Sussudio” was a cute novelty song at the time (Hey! What the heck does that word mean? He’s nutty!), but it was mindless pop drivel that stole directly from Prince’s “1999.” Why Prince (who always seemed to be so protective of his music) didn’t sue him is a mystery. “One More Night” was a mind-numbingly slow ballad with a surprising lack of percussion, given that Collins was a drummer. “Don’t Lose My Number” — well, it had no real point and suffered from massive overproduction. And it hit No. 4 on the Billboard chart. Go figure.

The next year saw the release of Genesis’ Invisible Touch. It sounded strikingly similar to Collins’ last solo album. The title track was pure pop — even Collins’ trademark drums were replaced with what seemed to be electronic percussion. “In Too Deep” was even worse than “One More Night.”

But “Land of Confusion,” an apparent “political” song that was supposed to show Genesis’ serious side, will forever be linked to that horrid video portraying the band as those annoying Spitting Image puppets. I don’t know why it bothered me so, but it seemed to be the epitome of sell-out: “I know! A video! With puppets! And, and, let’s make puppets of ourselves!” (Interestingly, the video was nominated for MTV’s Video of the Year award but lost — to Peter Gabriel’s “Sledgehammer”.)

What do I know? Invisible Touch launched Genesis into the Top 40 stratosphere, and they rode the wave to 15 million copies and five Top 10 hits from that album. But their next album was released five years later, and although it spawned a few Top 10 hits, it didn’t come close to the success of its predecessor. Soon thereafter Collins left the band and continued his transformation into Michael Bolton with ballad after ballad, culminating in — gasp! — a Disney theme song. I’m surprised Peter Gabriel didn’t go and kick his ass.